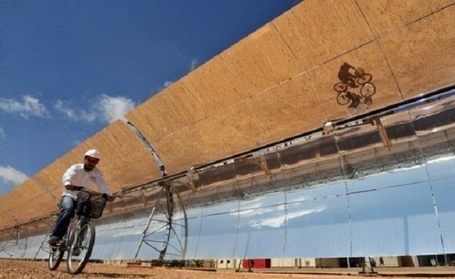 With the EU aiming to increasingly meet its energy needs from renewable sources – 30 per cent by 2020 and almost 100 per cent by 2050 – a great portion of this renewable power will have to come particularly from large-scale photovoltaic (PV) installations in sunny regions of the North Africa.

But since the Maghreb countries are likely to become Europe’s major supplier of solar energy by 2050, has the EU done enough to investigate opportunities and engage these countries to foster future solar-energy cooperation? And, conversely, are the North African states ready and willing to seriously deal with the problem of high costs for transmission and political instability that have so far prevented a rapid exploitation of these resources?

With the sunshine exceeding 2500 hours per year and very high radiation density, North African countries quite naturally constitute ideal locations for generating solar energy. In more concrete terms, the neighbors on Europe’s southern flank have the potential to generate several thousand times more solar energy than are their combined oil reserves – this is more than enough to supply both their own and European markets and completely meet energy needs in both regions for the rest of the 21st century and beyond.

The sad truth is, however, that both sides have so far largely failed to tap into even a fraction of the Maghreb states’ rich ‘solar potential’. In contrast, China, Germany, Spain, USA, and even many Central and Eastern European states with their generally low sun-radiation, have wholeheartedly embraced long-term strategies to beef up their renewable energy capacities. To illustrate the gloom picture on the ground, the current combined solar capacity of all the MENA region countries is reportedly less than 10 percent of the total capacity (for the 2011-12 period) of Germany that is obviously ‘blessed’ with much less favorable radiation for generating solar power when compared with the sun-drenched North African region.

However, amidst these negative reports and sentiments, there is a glimmer of hope. Proponents of solar energy who have long dreamed of an intercontinental super-grid – capable of transmitting solar power from sun-drenched North Africa to sun-challenged Europe – had joined hands in 2003 to establish the DESERTEC Foundation. Developed by the Trans-Mediterranean Renewable Energy Cooperation (TREC), DESERTEC Foundation is a non-profit organization tasked with promoting a global renewable energy plan based on the concept of harnessing sustainable power from sites with abundant sources of renewable energy (such as North Africa) and transferring it through high-voltage direct current transmissions to consumption centers (such as Europe). While DESERTEC-based experts who come from Europe, Middle East and North Africa envision various sources of renewable energy (such as wind and water/ocean), it is the sun-rich deserts that are foreseen to play a vital part in the whole project.

Ideally, the DESERTEC project is supposed to offer an integrated solution to food and water shortages, particularly in the North African region. However, while the DESERTEC Foundation has sought to gather support from governments, corporate sector as well as the population on both sides of the Mediterranean for the super-grid, the whole ambitious project may now be facing some serious obstacles and difficulties. As Eberhard Rhein, former director at the EU Commission responsible for the Mediterranean and Arab world, concluded in an interview for the North Africa Post: “…high costs for transmission and political instability prevent a rapid exploitation of these resources. I do not expect this situation to change before 2020, however much I may personally regret it. But there is no point to disseminate false expectations.”

Originally, the DESERTEC Project was designed to involve major European and Maghreb companies and its estimated costs were projected to top out at 400 billion Euros by 2040. Yet, the reality now is that key backers, namely the Siemens and Bosch corporations, announced that they would no longer participate in the project. The lingering economic problems in Europe and a sluggish economic recovery in North Africa have affected how much money the governments and corporations can contribute to the development of the energy super-grid. Also, the relative political and security instability on Europe’s southern flank has hardly reassured the wavering investors. Last but not the least, perhaps the greatest blow to the DESERTEC Project’s credibility was Spain’s recent refusal to sign a declaration of intent, which would allow it to use the already existing underwater transmission cables between Spain and Morocco. Among the reasons for this refusal are both financial issues (over-borrowed public budgets), issues with its own overcapacity of solar energy as well as Spanish government’s reluctance to become a mere transit country for the energy-hungry western and central Europe.

Faced with these complex economic, political, security and even geostrategic challenges, a successful implementation of the DESERTEC Project requires long-term comprehensive planning as well as patience and perseverance in negotiations involving interested governments, investors and potential supplier companies. The geographic proximity between Europe and North Africa pleads for close cooperation between the two shores of the Mediterranean to realize the vision of the North Africa-to-Europe Power Super-Grid – for the long-term benefit of both sides.