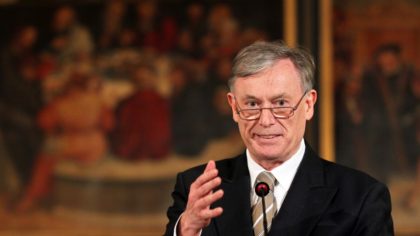 UN Secretary-General António Guterres announced Wednesday the appointment of Horst Köhler, former President of Germany, as his Personal Envoy for the Sahara.

Mr. Köhler brings more than 35 years of experience in government and international organizations, including as President of the Federal Republic of Germany (2004-2010), said the UN spokesman in a statement.

He served as Managing Director of the International Monetary Fund between 2000 and 2004, and as President of the European Bank for Reconstruction and Development in London (1998-2000), the statement said.

Köhler also served as State Secretary at the Federal Ministry of Finance (1990-1993) before being appointed President of the German Savings Bank Association (1993).

The new Personal Envoy succeeds American Christopher Ross whose tenure has expired in April after eight years of mediation that left the status quo unchanged. His term was marred by partial reports, a worn out negotiation process devoid of prospects for progress and biased and unbalanced guidance to the UN, in addition to his connivance with Algeria and a willingness to change the parameters of negotiations.

Given Köhler’s background, he is expected to lead UN mediation in the regional dispute over the Sahara with pragmatism, unlike his predecessor.