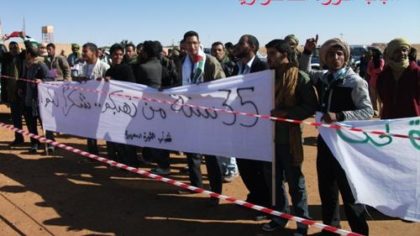 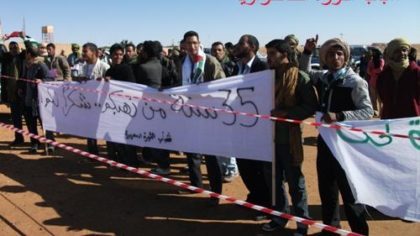 The leadership of the Algerian-backed separatist group, the Polisario, is facing a new challenge to its grip on the Tindouf camps as Sahraouis there stage unprecedented protests in their intensity.

The protesters, fed up with the siege they have suffered for decades by the Polisario militias, stormed into the office of the separatist group leader, Ibrahim Ghali in the Rabonni area.

One of their demands was to establish truth on the fate and whereabouts of three activists abducted by the Polisario militias for over 80 days for venturing to criticize the status-quo imposed by Ghali’s henchmen.

In June, the Polisario Front arrested Mahmoud Zidan, Fadel Braika, and Moulay Aba Zid, who were taking part in a protest to condemn a range of human rights violations endured by the population held captive in the camps in inhumane conditions.
Also, the three activists openly expressed their support for Morocco’s initiative to grant autonomy for the Sahara region and denounced the embezzlement of humanitarian aid by the polisario and Algeria.

Since June, the detainees’ relatives have been staging strikes and protests to condemn the “arbitrary detention” of the activists.

The families of the victims were not the only people to condemn the arbitrary arrest of the activists. In August, the Sahrawi Khat Shahid “the Line of the Martyr” movement addressed a letter to the United Nations, calling on the organization to end Polisario’s violations against the activists.

“They were kidnapped, tortured and thrown into small cells in a land where temperatures exceed 54 degrees.”

Human Rights Watch (HRW) has also called for the immediate release of the activists.

The Polisario responded to the growing protests by a crackdown, including stricter control on the freedom of movement.

The siege on Tindouf population highlights the fear by Algerian authorities and their Polisario puppets of seeing an exodus of the youth to Morocco, which regularly announces defections of armed men from the separatist militias.

Protests are commonplace in the Tindouf camps where uprisings are often violently silenced. In the past, the Polisario used to impose curfews in the camps to quell protests.

The Algerian army has on multiple occasions fired at any Sahrawi attempting to leave the camps. In March 2018, Algerian soldiers fired without warning at a car outside the Tindouf camps, killing Kari Mohamed Ali El Ouali and his friend Ahmed Lebouiya Sahraoui.