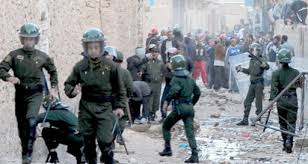 Human Rights Watch, EuroMed Rights, Amnesty International, and Front Line Defenders have condemned in the strongest terms Algeria’s discrimination against the Amazigh (Berber) minority and called for dropping all charges against Kamaleddine Fekhar, a leading human rights activist and his 40 co-defendants.

The international rights NGOs recalled, in a statement published on Human Rights Watch website, that Fekhar and his co-accused have been detained since 2015, stressing that “all the detainees are entitled to a trial within a reasonable time.”

“The authorities should immediately release them from pre-trial detention unless there is individual justification in each case of the necessity for their continued detention after nearly two years,” said the NGOs.

They called on Algerian authorities to provide solid evidence of the defendants face charges that could result in the death penalty.

“If Algerian authorities are to try those suspected of instigating and participating in deadly violence in Ghardaia Province, it should be on the basis of solid, individualized evidence,” said Sarah Leah Whitson, Middle East director at Human Rights Watch.

For her part, in defense of Kamaleddine Fekhar, Michel Tubiana, president of EuroMed Rights said that “no one should be prosecuted for his peaceful advocacy for rights of minorities, including for regional autonomy and independence, in compliance with international obligations of Algeria.”

Kamal Eddine Fekhar staged a hunger strike in protest over the unfair trial he received from a local court in Medea, Algeria, which handed him a 5-year prison sentence for writing articles slamming the Algerian regime’s atrocities in Ghardaia, critical Algerian media said.

Kamal Eddine Fekhar, a doctor by profession, has been in prison for almost two years pending trial on charges of “undermining state security and national unity”. His lawyer claims that his client has suffered torture in prison.

He headed the section of the Algerian League for Human Rights in the city of Ghardaia from 2004 to 2014. In late 2013, he founded the Movement for the Autonomy of the Mzab, a northern Sahara region, and has condemned the government for what he called a policy of apartheid and discrimination against the Mozabites, an Amazigh ethnic minority in the region. Most of the co-accused are also pro-Amazigh activists who favor autonomy for the Mzab.

Ghardaia is situated in the M’zab valley, a UNESCO world heritage site on the edge of the Sahara that has seen mounting tensions between the Amazigh Mozabite community and Arab tribes.

There have been sporadic confrontations between the two communities since December 2013 over property and land ownership after a local Mozabite shrine was vandalized.

Tensions between the Mozabite and Arab communities flare up periodically with at least 22 reported dead in violence that erupted in July 2015.

Besides linguistic and cultural differences, the Mozabites are Ibadit Muslims while their Arab neighbors follow Maliki Islam.