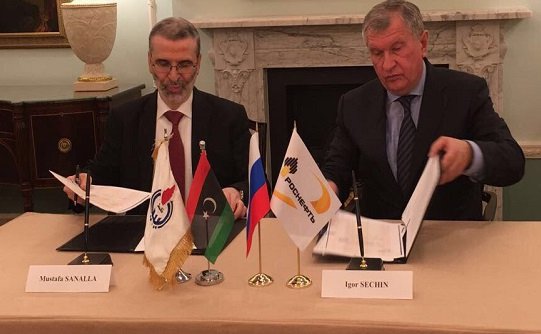 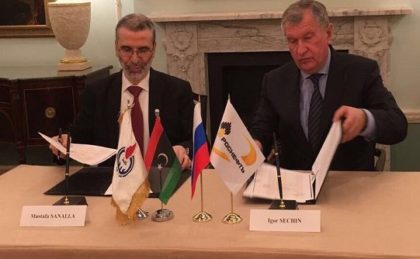 The agreement signed between Rosneft’s Igor Sechin and NOC’s Mustafa Sanalla in London on Monday allows the Russian company to explore Libya’s oil capacities and participate in the production.

According to some media, the text provides for the establishment of a joint working committee to explore possible cooperation in various fields.

Sanalla indicated that Libya needs foreign companies’ assistance to reach its targeted 2.1 million barrels per day by 2022, The Libya Herald reported, adding that Sanalla underscored that the assistance and investment of major international oil companies was needed to reach NOC’s production goals and stabilize Libyan economy.

“This agreement with Russia’s largest oil company lays the foundations for us to identify jointly areas of cooperation. Working with the NOC, Rosneft and Russia can play an important and constructive role in Libya,” the Libya Herald quoted him as saying.

Moscow’s support for Field Marshall Khalifa Haftar, opposed to the west-backed Government of National Accord, has stirred fears in western capitals. Pundits say Moscow is attempting to make Libya the next Syria.

“It looks like Rosneft is going to be the vehicle for Russia’s resource play in a geopolitically reshaped North Africa” said John Hamilton, director of Cross Border Information in London, said the Libyan media, recalling that prior to the agreement, British defense secretary Fallon warned the NATO against Putin’s growing involvement in Libya.

“Putin is testing the west, he is testing the [NATO] alliance and at any point he sees weakness he pushes home. That’s why it is important we stand up for our values and we continue to back the Sarraj government while urging it to be more representative of the interests of the east,” Fallon had said.