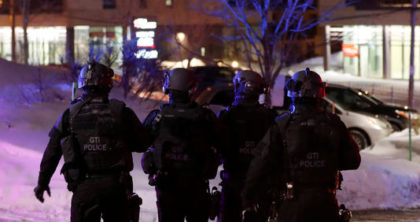 Gunmen attacked a mosque Sunday night in Quebec City killing six people and injuring eight others who were performing the evening prayer.

Canadian Prime Minister Justin Trudeau decried the attack, which he called a terrorist attack on Muslims.

“We condemn this terrorist attack on Muslims in a center of worship and refuge,” he said in a statement.

“Muslim-Canadians are an important part of our national fabric, and these senseless acts have no place in our communities, cities and country.”

Witnesses said gunmen Sunday night spread the mosque at Quebec City Islamic Cultural Center (CICC) with bullets while worshipers were performing evening prayer. Fifty people were reportedly praying during the attack in the two-storey building. The victims were aged between 35 and 70.

The reports say the gunmen charged three times during the shooting.

Two suspects have been arrested. One of them, aged 27, was holding a AK-47 assault rifle, reports say.

“We are with you… You are welcome in your home. We are all Quebecers. We must continue together to build an open welcoming and peaceful society”.