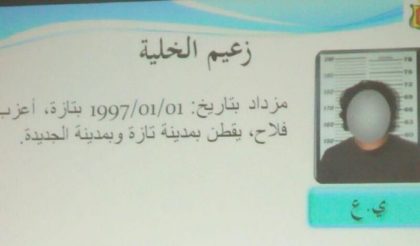 The terrorist cell affiliated to ISIS dismantled on January 27 in several Moroccan cities was in possession of firearms made in Russia, Germany and Italy that were smuggled into Morocco through the Algerian borders, said Abdelhak Khiame Head of Morocco’s Bureau of Judicial Investigations (BCIJ.)

“The fire arms seized during the operation in El Jadida were made in Italy, Germany and Russia…they were smuggled through the vast Moroccan Algerian borders which are difficult to control,” Khiame told the press.

A dangerous arsenal was confiscated during the operation including a machine gun, seven revolvers, military vests, locally made explosives and seven revolvers.

Khiame who explained the preventive approach underpinning the actions of the BCIJ, the Moroccan equivalent of the US FBI, said that his Bureau has closely monitored the terrorist cell and managed to abort its destructive plots before it moved into action.

He added that the mastermind of the terrorist cell was in his twenties and maintained close coordination with commanders of the terrorist ISIS organization in the Syrian, Iraqi and Libyan fronts. The six members of the cell, in the 20-29 age bracket, had been arrested in the localities of El Jadida,  Boulaouane, Oued Imlil, Salé and El Gara.

Following the success of the operation, the interior ministry issued a statement saying that the cell was planning to recruit and train youngsters to perpetrate destructive acts and undermine public order.

Last week, Moroccan police, in coordination with the BCIJ, dismantled another criminal gang led by an individual with loyalty to ISIS.