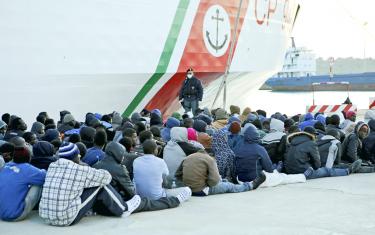 Migration: Italy to Accelerate Expulsion, Deportation of Migrants to Africa

Rome is fast-tracking plans and procedures to send migrants back to Africa after violent riots broke out between migrants sheltered at a migrant center and law enforcement officers following the death of one migrant woman.

The woman from Cote d’Ivoire, aged 25, died last week in the migrant center in Cona near Venice. Other migrants in the center protested against Italian authorities’ slow reaction over their situation. They accused authorities of negligence. The migrant woman died because she was sick, reports say.

The migrants also protested against poor health conditions in the center where 1,500 migrants have been regrouped.

“We are acting rigorously and with respect for human rights: we saved lives but we cannot afford to accept any person who breaks the rules,” Angelino Alfano told the media.

“That is why we must accelerate expulsions and deportation. I am working to broker deals that reduce arrivals and curb departures,” he added.

The Italian top diplomat also announced Italy is discussing such deals with Tunisia, Libya and Niger.

Italian Interior Minister, Marco Minniti was in Tunisia this week to renew bilateral cooperation with the North African country on deportation in exchange for assistance.

Around 242,179 migrants and refugees entered Europe by sea in 2016 through 20 July, arriving mostly in Italy and Greece, a report account of the International Migration Organization notes.