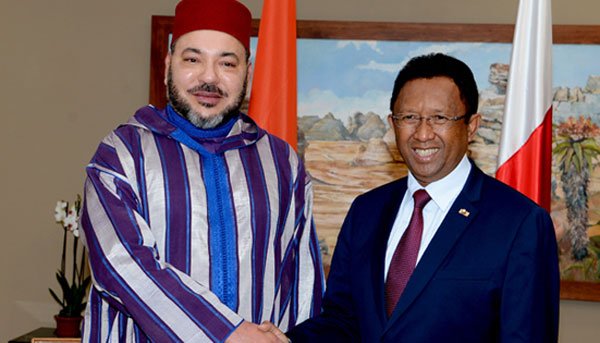 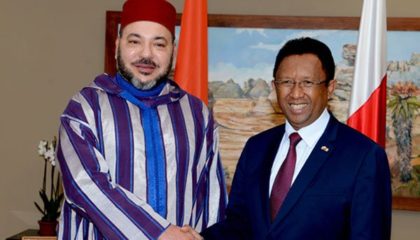 King Mohammed VI and President of Madagascar Hery Rajaonarimampianina, chaired Monday in Antananarivo, the signing ceremony of twenty-two bilateral cooperation agreements.
The deals, which cover several socioeconomic sectors including the political, cultural, commercial, diplomatic and educational fields, seek to enhance partnership between the two countries within the frame of the South-South cooperation and co-development.
Earlier, the Moroccan Sovereign held at the Presidential Palace in Antananarivo, tête-à-tête talks with Mr. Rajaonarimampianina who decorated the Monarch with the highest honorary distinction, a token of the high esteem and appreciation for the royal actions made for the sake of Africa.
For his part, King Mohammed VI decorated the Malagasy President with Al Wissam Al Mohammadi, the Kingdom’s highest distinction. The Moroccan Sovereign arrived on Saturday in Antananarivo for an official visit to Madagascar, 2nd leg of a new African tour that led the Sovereign to Ethiopia and will take him to other African countries.
Madagascar’s Foreign minister Attalah Beatrice said the Malagasy people are honored by the royal visit, recalling the special historic ties existing between Morocco and Madagascar which welcomed late King Mohammed V during his forced exile by the French colonizer in 1954.
During his stay in Madagascar, King Mohammed VI will visit the city of Antsirabe where his late grandfather and the Royal family were exiled by French authorities in 1954.
The Moroccan Sovereign will also lay the foundations of a hospital as well as a vocational training center that can accommodate thousand beneficiaries, the Malagasy presidency said in a statement.

During the visit, the King, along with 34 other Heads of state, will attend the 16th summit of the Francophonie due Nov. 22-27 in Antananarivo.