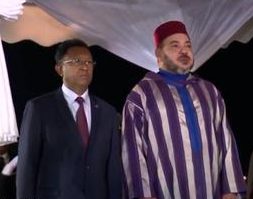 After a fruitful visit to Ethiopia, King Mohammed VI arrived in Madagascar, the land where his grandfather, late King Mohammed V, was exiled by the French protectorate in the early fifties of the past century.

The visit is part of Morocco’s Africa foreign policy which aims at establishing a south-south cooperation model underpinned by solidarity and co-development.

In Madagascar’s capital Antananarivo, the second leg of an African tour that will also take the King to Nigeria, the King was received by President Hery Rajaonarimampianina, who had attended the just concluded UN climate summit in Marrakech COP22.

During his stay in Madagascar, the King will visit the city of Antsirabe where his late grandfather and the Royal family where exiled by French authorities in 1954.

The King will also lay the foundations of a hospital as well as a vocational training centre that can accommodate thousand beneficiaries, the Malagashy presidency said in a statement.

During the visit, King Mohammed VI, along with 34 other Heads of state, will attend the 16th summit of the Francophonie which will take place on November 22-27 in Antananarivo.

The visit will add fresh impetus to Morocco’s legitimate right to regain its natural place in Africa’s institutional family, the African Union.