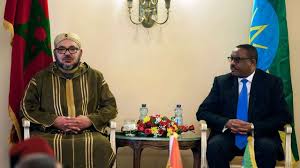 Ethiopia’s Prime Minister Hailé Mariam Dessalegn has voiced support for Morocco’s return to the African Union as of the next summit of the pan-African organization.

Ethiopia’s support for Morocco’s return to the African institutional family was articulated in a joint statement issued following King Mohammed VI’s landmark visit to Ethiopia, the first since his accession to the Throne.

“Haile Mariam Dessalegn has expressed the full commitment of Ethiopia to achieving the values and principles of the African Union. In this regards, Ethiopia expressed its support for Morocco’s decision to return to the African Union as of the next summit,” the joint statement wrapping up King Mohammed VI visit to Addis Ababa said.

The statement adds that the Ethiopian Prime Minister has commended Morocco’s contribution to stability and development in Africa and hailed Mohammed VI’s vision aiming at strengthening south-south cooperation in the continent through actions that scale up prosperity in Africa.

The same source says that the visit was an opportunity to exchange views on a set of regional and international issues and stress the need for the peaceful resolution of conflicts.

King Mohammed VI welcomed the opening of Ethiopia’s embassy in Rabat and thanked the Ethiopian leadership and people for the warm welcome. The King also extended an invitation to the Ethiopian Prime Minister to visit Morocco.

Several agreements were sealed during the King’s visit. They include agreements on protecting investments, an agreement to avoid double taxation and tax evasion in addition to other accords in the fields of economy, science, technology and culture along with agreements providing for cooperation on air transport, water, irrigation and tourism.

The landmark agreement during the visit was the deal to set up a giant fertilizer plant worth $3.7 bln as part of a joint Moroccan-Ethiopian venture. The deal “shows the shared South-South cooperation vision by the two parties according to which Africa’s natural resources should be geared towards African development and shared prosperity,” says the joint statement.