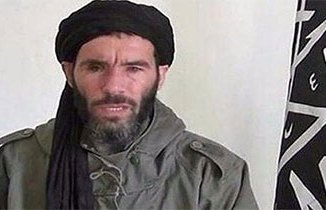 The Tunisian wife of Algerian terrorist Mokhtar Belmokhtar has been arrested along with another Tunisian woman in East Libya, reports say.
Anti-terrorism authorities of Libyan rival government based in the Eastern city of Beida announced the arrest of the women along with their driver.
The two women according to Libyan sources were heading to South of Libya to meet the terrorist who has been into hiding.
Security Libyan forces also told media sources the women whose identities have been kept secret were ambushed in the desert town of Mechili following tip-off.
The head of Al Qaeda in Maghreb (AQIM) according to Libya Herald has been using southern Libya as a base on numerous occasions. The Algerian terrorist also known as the One-Eyed is reported target of “the air raid on Gurdah Al-Shatti in Libya several days ago.” He escaped the raid which claimed lives of several fellows.
Belmokhtar soared to public eye in 2013 after taking hostage Algeria’s In Amenas gas facility. 40 people mostly foreign workers lost their lives.