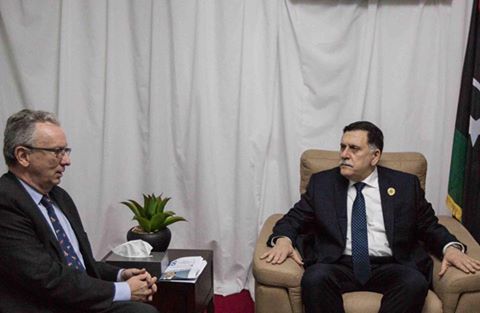 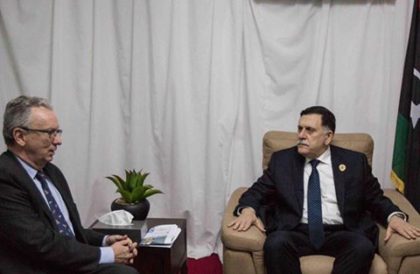 Libya’s UN-backed Prime Minister Faiez Serraj Monday formerly protested at French military presence as he met with French envoy at the sidelines of Arab League Summit in Nouakchott, Mauritania, reports say.
Serraj according to media team of his government had demanded from French Ambassador Antoine Sivan “an official explanation from the French government about the truth of what happened.”
“The GNA considered the French presence in Libya’s eastern region as a breach of international norms and sovereignty which it rejects,” said a statement from the Government of National Accord.
The GNA was annoyed last week after French President Francois Holland confirmed three of French military officers died in a helicopter crash during an intelligence operation in the East of the country along with forces loyal to General Khalifa Hafter; a staunched opponent of the GNA.
France, UK, US and several western countries have endorsed the GNA and have pledged to assist the UN-back government to rebuild the country, now in a shambles, following the death and demise of Muammar Gaddafi’s regime in 2011.
Antoine Sivan reportedly reiterated his country’s support for the GNA and promised a formal note to explain the circumstances of the incident.
Protests erupted last week in the west of the country to protest against French military presence. Protestors burned the French flag and called on the GNA to step down.

North Africa Post's news desk is composed of journalists and editors, who are constantly working to provide new and accurate stories to NAP readers.
NEWER POSTLibya: HoR-backed army Chief of staff threatens to attack oil tankers unauthorized by HoR
OLDER POSTFrance: “We are at war” Holland