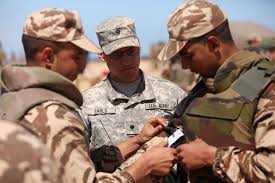 The African Sea Lion military drills between the US Amphibious Ready Group (ARG), the US Marine Expeditionary Unit (MEU) and Morocco’s Royal Navy drew to a close on July 14 after four days of exercises centering on mutual training and interoperability.

More than 4,000 Sailors and Marines from the ARG and the 22nd MEU departed from Norfolk and Little Creek, Virginia, and Camp Lejeune, North Carolina on June 25, the US Navy said on its website (navy.mil).

The deployment is part of a regular rotation of forces to support maritime security operations, provide crisis response capability and increase theater security cooperation while providing a forward naval presence in the US Navy’s 5th and 6th Fleet areas of operation.

Forty-two Royal Moroccan Navy and Royal Moroccan Naval Infantry personnel came aboard the USS Wasp (LHD 1) where they participated in mutual training briefs and worked with operations planners to help carry out the mission.

African Sea Lion is the first bilateral exercise the Wasp ARG has taken part in since their departure from Naval Station Norfolk.