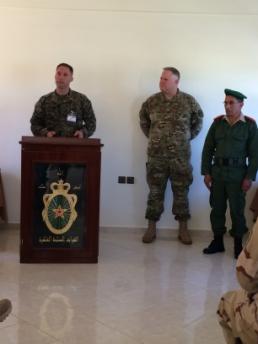 Moroccan and Mauritanian servicemen have benefited from intelligence course training conducted by US military experts in preparation for upcoming exercise “African Lion 2016.”

The training course was held March 3-25 at the Moroccan Southern Zone headquarters in Agadir, according to press reports. The three-week course is the first of what US service members are hoping will be more intelligence training events with Moroccan partners.

“I envision that the knowledge gained from this course will help the Moroccan and Mauritanian trainers become proficient with basic intelligence concepts and be better able to reduce uncertainty for their commanders,” said the US Marine intelligence security cooperation officer with Special Purpose Marine Air-Ground Task Force-Crisis Response-Africa.

“The course will also help them thrive in uncommon, complex environments, and be better prepared to support African Lion 2016” said the US intelligence security cooperation officer.

According to Gibraltar Chronicle, Moroccan forces have also carried out lately a month-long operational training in Sennybridge, South Wales, with the Royal Gibraltar Regiment [RG].

The RG continued its ‘close relationship’ with the Moroccan Armed Forces at Exercise Jebel Tarik, and invited members of the Forces Armées Royale [FAR] to join. A week before deployment to Sennybridge, 20 FAR personnel arrived in Gibraltar and underwent pre-deployment training.

“It is good to work with foreign troops, particularly the Moroccans, given the fact we have been working with them for over 15 years now,” said Chief Instructor Sgt Joshua Whitaker.

“These opportunities allow us to share ideas on best practices and enable the RG to continue developing its special relationship that has been in place for such a long time. The FAR troops were highly motivated and competent soldiers that engaged with us instantly and became fully integrated with the company from the outset,” he stressed.