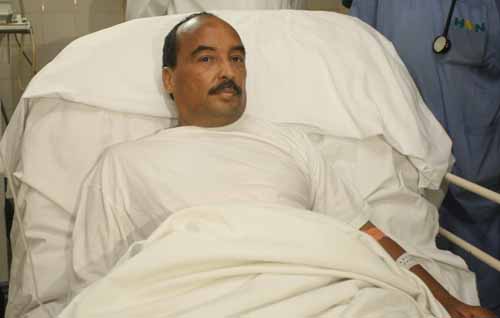 President Mohamed Ould Abdel Aziz of Mauritania has left on Wednesday the Percy Hospital in Paris where he had been treated for the gunshot wounds he was inflicted on October 13 in what was officially described as a “an accidental shooting”.
According to a presidency official, President Abdel Aziz was in good condition and went to his country’s embassy in Paris after he left the hospital.
The official did not say when the president would return back home, but some commentators think he may return for the Eid Al-Adha festival celebrated on Friday in the Islamic World.
President Abdel Aziz was wounded with two bullets by a Mauritanian soldier who appeared on the national television last weekend to assert that he fired at the head of state by mistake. The investigations conducted after the incident concluded that it was indeed a professional mistake and the soldier was authorized to go back to work.
After the shooting, President Abdel Aziz underwent a surgery in Nouakchott before being flown to Paris for further treatment on October 14.
Fearing an outbreak of disorder and chaos in his country, where military coups are frequent, the president appeared on the state TV before flying to France in an attempt to reassure the Mauritanian people.
However, despite the government’s assurances and the official account that it was an accidental shooting, some Mauritanians feared it was a failed assassination attempt by Al-Qaeda affiliated groups. The fears could be explained as these groups had threatened to retaliate after Mauritania launched in 2010 and 2011 several attacks on Islamist bases across its border with Mali.
Mr. Abdel Aziz, a former general, took power in 2008 following a bloodless military coup and was elected president in 2009.