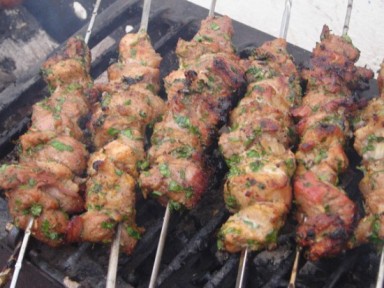 The spirit of Eid Al-Adha Festival

The Islamic world is readying to celebrate Eid Al-Adha, or the Feast of Sacrifice, commemorating Ibrahim’s (Abraham) obedience and his willingness to sacrifice his son as ordered by God.

The story goes that Ibrahim, a believer, had a dream in which Allah wanted him to sacrifice his son Ismail. Both father and son accepted to abide to God, but when Ibrahim was about to slaughter his son, Allah sent him a sheep to be slaughtered, instead of the boy.
Nowadays, the holiday, held the 10th of the month of Dhu Al-Hijjah, the last month of the lunar calendar, which also marks the end of the Hajj (pilgrimage) to Mecca, reminds everyone of the mercy of Allah and provides opportunity to show appreciation for this divine mercy.
To commemorate this ultimate sacrifice, every Muslim household, to the extent of its ability, sacrifices an animal (sheep, goat, cow or camel) and donates one third of the meat of the sacrificed animal to the poor, in compliance with the principles of solidarity and mutual assistance prescribed by Allah. One third of the meat is shared between neighbors and friends while the family enjoys the remaining third.
Eid Al-Adha is a godsend for farmers and for many trades. In Morocco for example, the Eid allows to inject nearly eight billion Dirhams in rural areas and helps retailers of spices and dried fruits to increase their sales by 20 to 30 percent compared to the rest of the year. Besides, some seasonal trades flourish on this occasion such as the sale of Tajines, braziers, Kebab skewers, wood charcoal to cook Kebabs etc. For some retailers, this is the best season to announce sales on refrigerators, freezers and cookers at a time some people seize this opportunity to rent their shops or even their garages to some shepherds who come from the countryside to cities to be closer and more tempting to the eventual buyers.
However if this festival is an opportunity to rejoice for wealthy families, for many needy families and even middle class families, it is a headache because sheep prices soar from year to year and become unaffordable for many, especially in North African countries where the GDP per capita stands at best at around $7,000 while it exceeds $ 20,000 in many gulf countries.
Although the offer exceeds the demand as in Algeria and Morocco, the prices recorded a staggering increase. Cattle breeders and shepherds justify the increase by the high prices of fodder while others blame the so many intermediaries between the initial breeder and the final retailer as well as the phenomenon of speculation especially in the few days preceding the Eid.
As the prices reach levels that are beyond the purchasing power of the middle class, many families decide to celebrate the Eid without sacrificing a sheep, as this sacrifice is not a religious obligation for those who do not have the means to do so.
However, if skipping the sacrifice is possible in some well-to-do social milieus, in the lower strata of the society, it is a must and furthermore the sheep must be bigger than the neighbor’s. Some families live serious tragedies because of argument about purchasing the sheep or not or about the size and price of the animal. There are no statistics, but several couples end up before a judge for divorce. Even if theologians and preachers explain again and again that sacrificing is not an obligation, nobody seems to heed. Traditions are deeply rooted and no fatwa can change them.

Eid Al-Adha Mubarak to all Muslims around the world