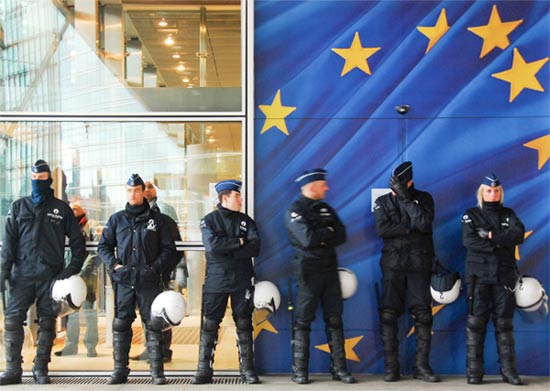 The EU’s Response to Terrorism in North Africa

The events of the Arab Spring have brought many changes to North Africa and the Middle East. However, it is yet to be seen whether the struggles of North Africans will bring about meaningful positive democratic change in the region.

On the one hand, North African terrorist groups were mostly left on the sidelines during the protests that swept North Africa. Yet, on the other hand, a side effect of these events is that significant quantities of weapons have been smuggled out of Libya and may have found their way to rebels and terrorists. This has contributed to the destabilisation of the Sahel region of Africa, which is an area already beset by a number of problems, including a food crisis, terrorism, and now rebellion. Mali – previously one of the few examples in the region of a reasonably stable democracy – has emerged as a victim of a rebellion, with the northern part of the country being controlled by rebel factions whereby this instability is being exploited by drug-traffickers, Al-Qaeda, and other Islamist fighters.
In 2012, Europol (the European Police Office) reported in its Terrorism Situation and Trend (TE-SAT) Report that “the ability of al-Qaeda core in Pakistan to direct terrorist attacks abroad has likewise lessened in tandem with the isolation of the al-Qaeda hierarchy in the Pakistan region. Whilst bin Laden was arguably a figure of increasingly peripheral importance, the ongoing Arab Spring developments in the North African and Middle East region are currently more significant”. Therefore, although the remnants of Al Qaeda in South Asia still do pose a threat to Europe (probably mostly to the UK), the European Union (EU) is currently focusing its efforts on the more pressing situation in North Africa.

“It is worth noting that AQIM is yet to manage an attack on the European continent, but it has often been suspected that it has criminal links in Europe and is well-known to kidnap Westerners in North Africa for ransom money.”

With regard to terrorism specifically, Al Qaeda in the Islamic Maghreb (AQIM) has emerged as a threat to France and Spain in particular. It is worth noting that AQIM is yet to manage an attack on the European continent, but it has often been suspected that it has criminal links in Europe and is well-known to kidnap Westerners in North Africa for ransom money. Europol suspect that AQIM (and the Nigerian Boko Haram) have been able to strengthen themselves because of the availability of weapons and the generally weak governance in the North African region. Even so, it has been suggested more than once that France and the US have overplayed the threat of AQIM for their own strategic reasons. In addition, Algeria and Mauritania are keen to be thought of as allies in fighting terrorism.

The EU has attempted to co-operate with North African countries in the past, labelling Algeria and Morocco as ‘priority’ countries for counter-terrorism assistance following 9/11. However, these efforts were not always successful because they preferred to maintain their bilateral relations with France and Spain. Whether fact or fiction, the EU has reacted to the apparent threat in the Sahel with a Strategy for Security and Development, considering them two sides of the same coin. The EU has initiated a new project called EUCAP Niger to combat terrorism, which will provide civilian and military experts to help build up local capacity to fight terrorism, but with liaison officers also placed in Nouakchott (Mauritania) and Bamoko (Mali). The EU has for several years been one of the key actors in the region, and the Sahel may be an area where the “EU leadership… is the most credible, capable, and potentially decisive”. In short, this is a region in which it is quite possible that the EU could come to play a significant role in the future.

“But, most importantly, the EU and European governments should be careful not to contribute to re-installing the oppressive regimes of yesteryear in the hope of providing security in the region and should instead adhere to the will of the region’s people.”

Overall, the direction that North African countries take will be for the future to decide. What is clear is that the turmoil caused by the uprisings in North Africa has had the unfortunate side-effect of contributing to the destabilisation of the Sahel area to the south, which was already beset by problems. The EU has endeavoured to become an important actor in the region, both in security and development matters. With this in mind, it can only be hoped that the EU can indeed be a credible and capable actor in the region; after all, problems in North Africa could have many potential spill-over effects on Europe. But, most importantly, the EU and European governments should be careful not to contribute to re-installing the oppressive regimes of yesteryear in the hope of providing security in the region and should instead adhere to the will of the region’s people.

If the West does not learn this lesson, Western responses may simply perpetuate the existing problems and create a vicious circle of anger that could have detrimental consequences for all.