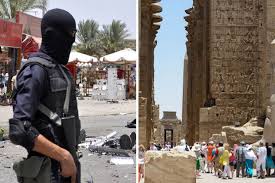 Egypt, Tunisia to team up against terrorism

President Beji Caid Essebsi of Tunisia held a closed door meeting with his Egyptian counterpart Abdel-Fattah El Sisi shortly after he arrived in Cairo Sunday on his maiden official visit to the country.

President Essebsi described the meeting as “successful” and said there is a mutual interest to strengthen cooperation and solidarity.

In a joint statement released after the meeting, the two presidents underlined their shared concerns over the political situation in the region and the threat posed by terrorist groups.

As both countries are battling against terrorists, they discussed means of unifying their efforts to effectively combat the plague threatening their security and to face up together the dangers looming on the Arab and Islamic nations.

In this vein, the two presidents called on Libya’s rival governments to approve and sign the U.N-brokered peace agreement and voiced support for a political solution in Syria in accordance with the needs of the Syrians and in the interest of the country’s unity and security.

The two heads of State deplored the developments at Jerusalem’s Al-Aqsa Mosque as “unfortunate” and “unacceptable” and stressed that the Palestinian issue remains a priority on their respective agendas.

Egyptian-Tunisian cooperation has been increasing and the 15th joint High Committee meeting held last month ended with the signing of several memorandums of understanding in diverse domains.