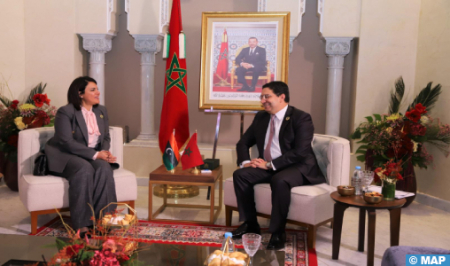 “The Kingdom of Morocco has always played a positive role in supporting stability in Libya and the efforts of the Government of National Unity and Libyan institutions to move forward and achieve a constitutional basis for the organization of free and fair elections, accepted by the Libyan people,” stressed Mangoush, in a statement to the press after talks with Foreign Minister Nasser Bourita, on the sidelines of the 9th forum of the Alliance of Civilizations (UNAOC).

“The stability of Libya is part of the stability of the region, and we will not be stable without the efforts of our brothers, whether on the African continent or in the Maghreb countries, as well as within the European Union and the Union for the Mediterranean,” she added.

For his part, Bourita recalled the known positions of Morocco regarding the stability of Libya, highlighting the special interest of King Mohammed VI in the stability of this brotherly Maghreb country.

He also indicated that Morocco is following the ongoing developments on the Libyan scene, describing these developments as globally encouraging, given that solutions based on dialogue, respect for institutions and work for the interest of Libya and the Libyan people have been privileged.

Bourita also stressed that Morocco will always stand by Libya and its institutions, and will work within the framework of accompanying the efforts of the United Nations, to achieve elections that will put an end to the debate on the issue of legitimacy. The Maghreb, the Mediterranean and Africa need Libya, he said.

The talks were an opportunity to reiterate these positions, as well as to coordinate on issues of common interest, both at the level of the League of Arab States, the African Union, and the Union for the Mediterranean.