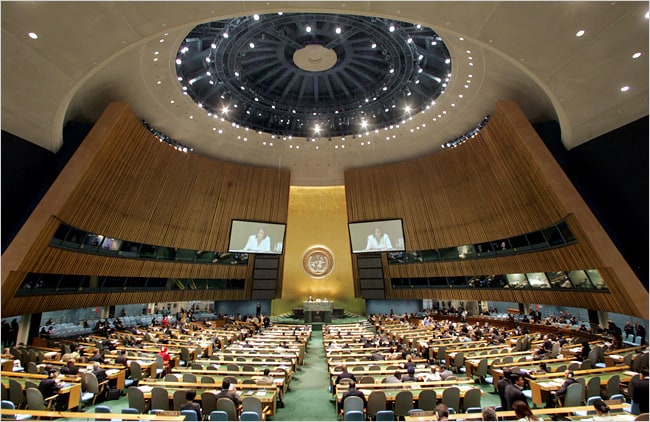 International experts have denounced, in New York, the proven links of the armed separatist group polisario with terrorism and organized crime in the Sahel-Saharan region, warning that the Algeria-backed idea to have a micro-state in the Maghreb is dangerous, and will plunge the whole region in unprecedented violence.

The Sahel-Saharan region is a major area of illicit activities and a transit corridor to different parts of the world for small arms and drugs, where the “polisario” is a concrete example of three overlapping agendas: that of terrorism, separatism and organized crime,” said Solomon Assor Sydney, president of the NGO “Surry Three Faiths Forum”, in an address before the 4th Committee of the UN General Assembly.

He noted that the Tindouf camps, which have long become a “hotbed of repression of sequestered populations, are linked to terrorist networks and traffickers in arms, drugs and human beings.” These camps, located in northwest Algeria, are now a “huge breeding ground for terrorists and outlaws,” he said.

“The transnational illicit networks find in the camps a rear base that provides them with food from diverted humanitarian aid addressed primarily to the population of the camps, but also weapons, vehicles and fuel,” denounced the petitioner, warning that the presence on Algerian soil, at the crossroads of the borders of Morocco, Mauritania and Mali, of the polisario armed militias is a “destabilizing factor” for international security.

He insisted that the persistence of the artificial conflict around the Sahara has generated a “marriage of interests” between the polisario and terrorist networks that are very active in the Sahel-Saharan region, arguing that “the idea defended with fervor by the host country of the camps, to have a micro-state in the Maghreb is not only unsustainable, but dangerous, and will lead the whole region in trajectories of unprecedented violence.”

One of the realistic measures against the development of the arms trade in the Sahel is the dissolution of the Polisario, he said.

The petitioner further noted that the regional dispute on the Sahara lives at the pace of a positive and realistic development, stressing that the Moroccan autonomy initiative remains the only solution to close this “unfortunate chapter”, building an environment conducive to lasting peace and security, and ending the geopolitical instrumentalization of terror to undermine the territorial integrity of the countries in the region.

Echoing him, the President of the Sahel Institute of Research and Analysis for Conflict Transformation, Souleymane Satigui Sidibe, spoke out against the encouragement of non-state armed groups in the Sahel-Saharan region which constitutes a “permanent danger for the people and mortgages their future and their aspirations for a dignified and peaceful life.”

He denounced the behavior of some states in the region “who are coconspirators in this situation, thinking that their stability depends on the instability of their neighbors.”

The former Secretary General of the African Youth stressed the urgency of recalling the danger that threatens the Sahel region with the encouragement of armed groups or in any form, while they are, in most cases, groups that operate with terrorists, drug traffickers and all obscurantist forces to the detriment of peace and human tranquility.

“Many terrorist groups are supplied from humanitarian sites whose management of food and fuel are hijacked by allies disguised in fighting and a tour of the markets bordering the Sahel will show that the Polisario is no exception,” he said.

He noted that “those who claim to be a state have no legitimacy” because the vast majority of the population of the Moroccan Sahara recognizes the efforts made by Morocco under the leadership of King Mohammed VI for the promotion of the southern provinces and thus build a bridge of development to the African continent and the Sahel-Saharan area in particular.

The President of the Sahel Institute for Research and Analysis for Conflict Transformation has, in this context, highlighted the dynamics of socio-economic development and better living conditions enjoyed by the population of the southern provinces. He also said he was impressed by the degree of integration of African migrants, who eventually came to Morocco and chose to settle in the Saharan provinces, where they have access, like the local population, to employment, health services and schooling of their children.