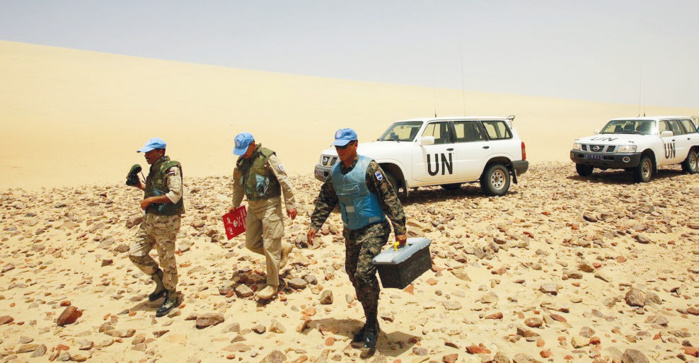 UN Secretary-General Antonio Guterres renewed concerns over the continued restrictions imposed by the separatist polisario front to freedom of movement of MINURSO agents and its provocative maneuvers undermining the UN-led political process on the Sahara.

In his report to the UN Security Council, which is expected to renew this October the mandate of the UN Mission for the Referendum in Western Sahara (MINURSO), the Secretary General expressed concerns over the Polisario’s actions, particularly its restrictions that hamper the work of the UN peacekeeping mission.

“I strongly urge the Frente POLISARIO to remove all restrictions to the free movement of MINURSO military observers, ground convoys, air assets, and personnel east of the berm,” the UN report urged.

The UN Secretary-General argued that without full freedom of movement, MINURSO “may soon be unable to sustain its presence east of the berm.”

Antonio Guterres admitted that the Polisario Front obstructed the ground patrols that were supposed to be carried out by the MINURSO mission within the front units, similar to the patrols it is carrying out in the sites of Morocco’s Royal Armed Forces.

The annual report of the United Nations on the Moroccan Sahara confirmed that the mission’s ground patrols attempted to conduct a total of 4,072 visits to the Polisario units, but the front’s leaders prevented them from reaching those spots, as they hampered the movement of the MINURSO logistical land convoys.

The UN document pointed out that the acting commander of the MINURSO mission force was unable to establish direct contact with the military elements of the Polisario Front, and all contacts were made only through written correspondence, indicating that the front also rejected requests to increase the frequency of the mission’s logistical trips.

The UN Secretary General reported on Polisario’s reluctance to engage in talks and in-person contacts with MINURSO leadership, and underlined the Polisario Front’s categorical rejection of the mission’s efforts to investigate air or ground patrols east of the berm.

“MINURSO ground patrols attempted to conduct a total of 2,407 visits to Frente Polisario units and headquarters but were denied access,” the report said, emphasizing that Polisario denied MINURSO’s group patrols inside Polisario headquarters.

Meanwhile, the report stated that cooperation and communications at the strategic level continued between the UN Mission and the leadership of the Royal Armed Forces without change. In this connection, the UN Secretary General commended Morocco’s engagement with his Special Representative, saying the MINURSO mission in the Moroccan Sahara was able to conduct 6,167 visits to the headquarters of the Royal Armed Forces, as well as sub-units and observation posts, west of the berm.

“I welcome the resumed engagement between Morocco and my Special Representative and urge Frente Polisario to resume regular contacts in person with the MINURSO leadership, both civilian and military,” paragraph 96 of the UNSG report reads.

The report also voiced the international community’s concern over the presence of drug smugglers and criminal elements in the region.

The document warned of “the risk of escalation between the parties in the buffer zone after the ceasefire agreement, which contributes to increasing tension in the region,” and called on the parties to the conflict to deal with the UNSG’s personal envoy Staffan de Mistura with “an open mind in order to facilitate the peaceful political process.”

The annual report of the Secretary-General of the United Nations on the Sahara conflict also called on the countries of the region to engage in “good faith” in political negotiations to end the conflict, pointing to the United Nations’ readiness to hold intensive meetings with all concerned with the file.