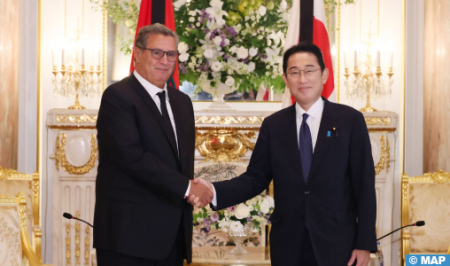 During the talks, Kishida assured Akhannouch of his desire to see Morocco, an important partner, participate in all meetings organized by Japan and to coordinate the action of the two countries within institutions and international fora.

The Japanese Prime Minister particularly emphasized the excellent relations between the Royal Moroccan Family and the Imperial Japanese Family.

He praised the important role of played by King Mohammed VI in the preservation of peace and security in the world.

In addition, the Japanese Prime Minister expressed Japan’s interest in developing cooperation and trade with Morocco, particularly in the fields of agriculture and fertilizers.

Kishida commended the pioneering policy implemented by Morocco, under the king’s leadership, in the field of renewable energy.

Kishida also welcomed the entry into force this year of the agreement for the promotion and protection of investments and the Convention on the avoidance of double taxation between Morocco and Japan, as well as the presence of more than 70 Japanese companies in Morocco, creating more than 50,000 direct jobs, which makes Japan the first foreign private employer in the Kingdom.

During this meeting, Akhannouch reiterated the condolences of King Mohammed VI following the death of the former Japanese Prime Minister, Shinzo Abe.

He also reiterated the willingness of Morocco to host more Japanese companies and to develop cooperation with Japan in all areas.

The talks were an opportunity for Akhannouch and Kishida to review the international situation, particularly in the areas of food and energy security.

They welcomed, in this regard, the strength of existing relations between Morocco and Japan and expressed their desire to deepen them further.

Following this ceremony, the Head of Government went to Akasaka Palace, where he presented the King’s condolences to the Japanese Prime Minister, as well as to the widow of the deceased, Akie Abe.