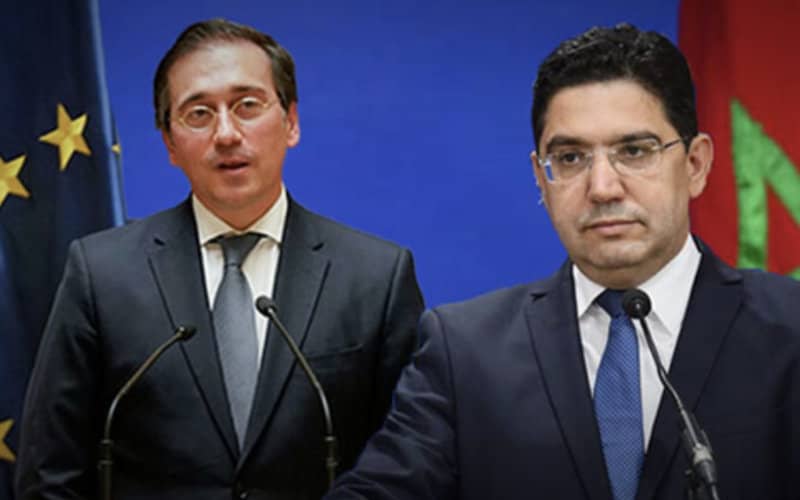 The Spanish Minister of Foreign Affairs, José Manuel Albares, welcomed, the “intense” strategic partnership between Spain and Morocco which reflects “a new stage” based on “transparency, permanent communication and mutual respect.”

“We have an intense bilateral program covering all aspects of our bilateral relationship, based on transparency, permanent communication and mutual respect. These are the principles of a sincere cooperation between two strategic partners like Spain and Morocco,” said the head of Spanish diplomacy at the end of talks with his Moroccan peer Nasser Bourita, on the sidelines of the 77th UN General Assembly.

This is a “new stage” in relations between Madrid and Rabat, he said, adding that his talks with Bourita were an opportunity to establish the basis for “next steps”.

“We have achieved a more-than-significant progress that the Moroccan and Spanish people are already enjoying,” he said, referring to the resumption of links, which also allowed thousands of families to be reunited this summer through the Marhaba operation after the years of pandemics.

He also stressed that he has agreed with his Moroccan counterpart to hold, as planned, the high-level meeting before the end of the year.

For the Spanish minister, this meeting will be “a new opportunity to take stock and continue to move forward together and reaffirm the Spanish-Moroccan friendship.

While recalling that this high-level meeting has not been held since 2015, he noted that, since last April, all the working groups created in accordance with the roadmap of the Joint Declaration issued at the end of discussions between King Mohammed VI and the President of the Spanish government, Pedro Sánchez, have held several sessions and are meeting the planned schedule.

Regarding the “regular and orderly” movement of goods, the Spanish minister noted that Spanish exports to Morocco have increased by 30% in just one year, reaching 6,000 million euros, consolidating Spain’s position as the Kingdom’s leading trading partner.

“But we want to go further, that’s why we are working with the objective of achieving a land passage for goods next January,” he said, stressing that as part of the “reactivation” of bilateral cooperation, both sides have “agreed to work for the orderly and gradual passage of goods through land customs posts to begin in January.

Albares also announced that the Spanish government will approve a project for a fund to promote development worth 20 million euros, the first project over 20 years in Morocco to provide microcredit to promote the inclusion of youth and women in the productive system.

He said that cooperation between the two countries will also focus on technical assistance in the railway sector, the water sector and for the establishment of integrated systems.

As for migration, the Spanish minister referred to “evidence of excellent cooperation”, noting that the figures of irregular arrivals have been reduced by 20% in the last four months compared to the same period last year.

“This is the result, among other things, of the joint work against the criminal networks of human trafficking. We have agreed to continue strengthening this cooperation, especially on the Atlantic coast,” he said.

Echoing him, Nasser Bourita described Moroccan-Spanish cooperation relations in the field of migration management as “exemplary” and “unique.”

Partnership dynamics on this component will have positive repercussions both bilaterally and regionally, he said.

The Moroccan minister announced on this occasion, that Rabat and Madrid intend to coordinate their efforts at a meeting scheduled for December to involve other countries in this approach to manage the migration issue and fight against trafficking networks.