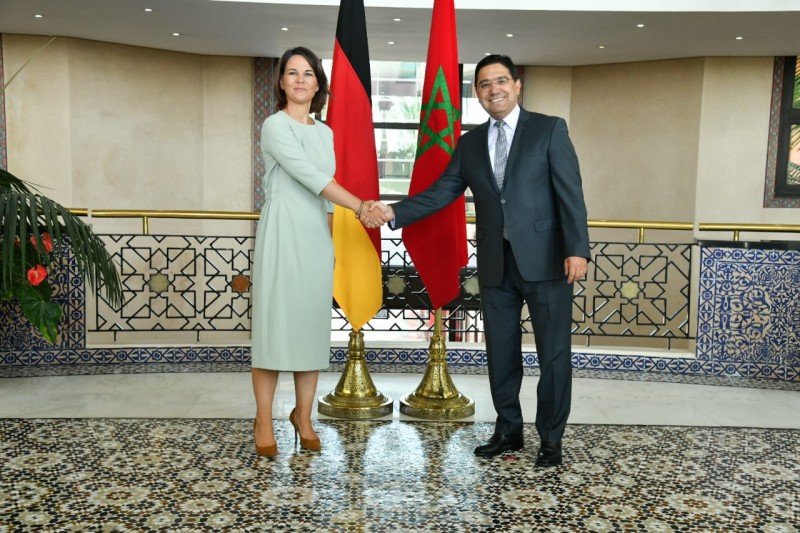 The government of Germany has reaffirmed its strong backing to the autonomy plan offered by Morocco for a lasting resolution of the Sahara regional conflict.

The German supportive stand comes in a joint statement released following the meeting held Thursday in Rabat between Moroccan foreign minister Nasser Bourita and German peer Annalena Baerbock, who is on a working visit to the North African Kingdom. This is the first in-person meeting between the two countries top diplomats after settling their diplomatic spat over the Sahara.

Berlin deems “the autonomy plan, presented in 2007, as a serious and credible effort by Morocco and as a good basis for reaching a solution accepted by the parties’’, underlined the joint statement.

The German FM reiterated her country’s long-standing support for the UN-led process engaged to reach a realistic, pragmatic, sustainable and mutually acceptable political solution to the Sahara issue.

In their joint statement, Bourita and Baerbock insisted on the UN exclusive role in handling the Sahara issue and reaffirmed their support for UN Security Council Resolution 2602, which stressed the role and responsibility of the parties in finding a realistic, pragmatic and enduring political solution.

Morocco and Germany also welcomed the appointment of UN Sahara Envoy, Staffan de Mistura, and reaffirmed their full support for his efforts to advance the political process on the basis of the relevant UN Security Council resolutions. They also reiterated their support for MINURSO.

Prior to her trip to Rabat, the German FM issued a statement describing Morocco as Europe’s closest neighbor to the south, which is perfectly placed to become an important strategic pillar in the European energy transition.

“The country has been working closely with Germany on developing renewables for more than a decade. However, even looking beyond this, the potential for increased economic cooperation and person-to-person contact is huge’’, said Mrs. Baerbock.

In recent months, “we have worked hard to build a shared foundation for a forward-looking partnership. Many new cooperation blueprints have been developed and many projects that were successful in the past have been re-launched. With my visit today, we now want to open this new chapter in our bilateral relations together’’, said the German top diplomat.

In its twitter account, the German Foreign ministry said the two countries agreed “to open a new chapter in their relations with closer cooperation in energy, climate and security”.