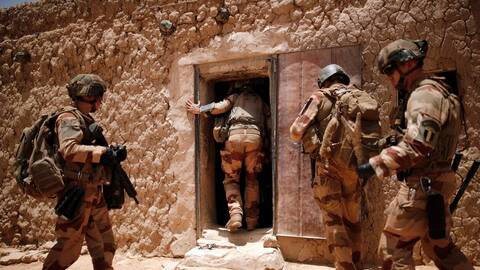 Mali has accused France of violating its airspace and supporting “terrorist groups” by delivering weapons to armed groups, the latest in a barrage of accusations that have strained the relationship between the West African country and the former colonial power.
In a recent letter to the UN Security Council’s president, Mali’s Foreign Affairs Minister, Abdoulaye Diop, referred to more than 50 “deliberate violations of Malian airspace” by foreign aircraft, “particularly operated by French forces,” and listed several incidents of alleged violations. “The government of Mali has several pieces of evidence that these flagrant violations of Malian airspace were used by France to collect intelligence for the benefit of terrorist groups operating in the Sahel and to drop arms and ammunitions to them,” the letter reads.
“France has obviously never supported, directly or indirectly, these terrorist groups, which remain its designated enemies across the planet,” said the French Embassy in Mali on Twitter. It said that 53 French soldiers had died during its nine-year mission in Mali and that France had killed hundreds of members of armed groups in order to improve security for Malians. Bamako has repeatedly accused Paris of attempting to destabilize the country, just as Russian mercenaries hired by the military government expand their reach in the country. France on Monday completed the withdrawal of its troops from Mali, ending a nine-year operation in the country at the centre of the Sahel region’s spiraling security crisis.