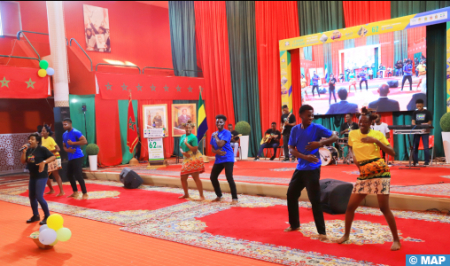 For the second consecutive year, the Embassy of Gabon in Rabat has chosen to celebrate the country’s 62nd independence anniversary in the Moroccan southern city of Laayoune, which is hosting a Gabonese Consulate General since January 2020.

The celebration of the national event in Laayoune reflects once more Gabon’s unwavering support for the Moroccan Sahara and the territorial integrity of the Kingdom, said Ambassador and High Representative of Gabon to Morocco, Minko Mi Nseme Sylver Aboubacar at the opening of a ceremony held Wednesday.

“Coming to celebrate our national holiday here in Laayoune is a strong act for us and our Moroccan brothers,” said the diplomat who recalled that Gabon had participated in the Green March in 1975.

This initiative is part of the celebration of the fiftieth anniversary of the establishment of relations between Gabon and Morocco, he said, welcoming the excellent brotherly ties uniting the two friendly countries, under the leadership of King Mohammed VI and President Ali Bongo.

By its geographical position and its enormous assets, the region of Laayoune-Sakia El Hamra is a “natural crossroads” to sub-Saharan Africa, which can facilitate the flow of trade between Morocco and the countries of this region, the Gabonese diplomat noted.

He also welcomed the development process in Morocco’s southern provinces, particularly in the areas of infrastructure, renewable energy and training.
The celebration of the event on August 16-17, under the sign “Gabon in Laayoune”, featured artistic performances that reflect the rich cultural heritage of Gabon, an exhibition of Gabonese products and visits to several flagship projects in the province of Laayoune.

On the sidelines of this ceremony, a partnership agreement was signed between the Startup Grow Foundation (Morocco) and the Mouetse association for feminist combat in the public cause (Gabon) to empower women.