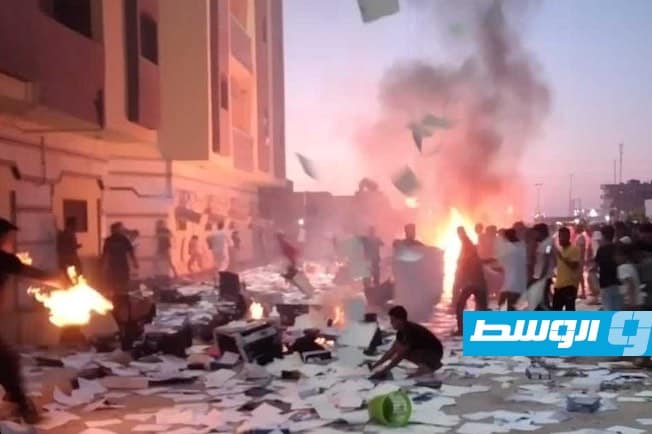 Parliament Speaker Aqila Saleh has accused Muhamed Menfi, the Presidential Council’s Head, of having a role in the attack on the Parliament’s HQ in Tobruk last Friday, Libya Observer reports.
A nationwide protest swept through Libya last week from Friday calling for elections and replacement of current institutions and figures. The demonstrators stormed the headquarters of the House of Representatives (HoR) in Tobruk and burned it down.
While speaking to the local TV Channel Libya Al-Mustaqbal, Aqila floated the accusation that Menfi played a role in one way or another through his brother Sami, and the “truth will emerge” once completing the investigations.
Parliament Spokesman Abdullah Bliheg also argued some confidential documents were stolen during the attack on the legislature. He added that “protesters driven by suspicious parties that do not represent Tobruk” are the ones who burned the building and stole secret documents.
Saleh’s statements, Libya Observer notes, come in light of increasing speculation that the Presidential Council (PC) may issue a decree to dissolve the House of Representatives and the High Council of State and form a Cabinet to prepare for the elections.
The HoR Speaker slammed the PC positing that it is not for it to issue decrees with the force of law, but within the purview of an elected head of state, through the constitution, insisting that only the constitution and law grant the head of state the right to do so.”
“This is what they call the encounter of weapons.. as the executive authority has the right to dissolve the parliament, the legislature also has the right to dissolve the government,” he added.