Morocco’s aeronautics industry sector which has constantly progressed since it was launched in the late nineties of the last century has attracted this week a € 45 million new investment. 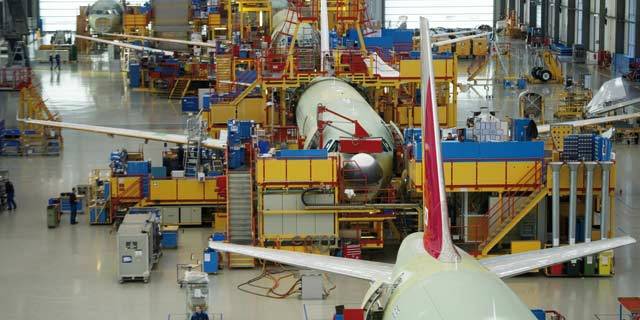 The investment will be injected by Aerolia, an Airbus Group subsidiary, and Alcoa, a global leader in lightweight metals technology, which has reoriented its activity from precision tools manufacturing to the manufacturing of fastening systems for the aerospace industry.

The investment related agreements were signed on Wednesday by Moroccan Minister of Industry Moulay Hafid Elalami and the two companies’ executives on the sidelines of the ongoing Farnborough Air Show, which opened on July 14 in the suburbs of London.

The two companies which will relocate part of their operations in Morocco are expected to generate more than 750 jobs in a first phase.

Aerolia, a French aerostructures leader and major worldwide player for design and production of equipped fuselages, will locate its production unit in the Casablanca industrial platform, Midparc.

Aerolia, which produces every year more than 650 noses and fuselage sections and 6 million elementary parts and panels, is to inject a € 40 million worth investment in its Casablanca unit. It is expected to create, in a first phase, 500 direct jobs and an additional 500 indirect jobs in the new unit that will principally focus on the assembly of large subassemblies and complex aerostructures. Aerolia is planning to increase, in a later phase, its production rates and to expand its commercial policy towards diversification markets (mainly Boeing, Bombardier and Embraer.)

The second agreement signed with Alcoa Aerospace provides for the transfer to Morocco of part of the activities of this $4 billion technology leader in integrated aerospace solutions. The group is planning, part of its overall growth strategy, to invest in the new facility some € 4.6 million over the 2014-2016 period and to create 250 jobs.

The Alcoa group is already operating in Morocco since 2009 when it bought the Demicron company, located in the Bouskoura industrial park near Casablanca, and established there its Alcoa Fastening Systems division. The division was EN9100-certified in 2011 for the design and quality of its aerospace fasteners, aircraft mechanical parts and precision tools and spare parts.

The objective of Alcoa in Morocco is to multiply ten folds the sales of the unit over the next ten years, through the transfer of new product lines (precision fasteners, titanium fittings).

Besides its geographical location and its political stability that make of it an attractive country for investments, Morocco grants luring financial incentive packages to investors to promote international trade and logistics activity. The incentives include in some cases tax exemption for five years and rates of 8.75 per cent for an additional 20 years and 17.5 per cent thereafter. The North Africa country has also opened the Moroccan Aerospace Institute (IMA) to promote aerospace training programs and provide skilled workers to the industry.