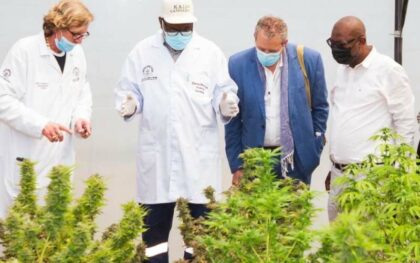 South Africa opened its very first marijuana retail outlet. The initiative aims to better regulate the use of this herb, whose industry, promising in many ways, still operates at the margin despite the decriminalization of its use since 2018.

The structure called THC Africa is placed under the authority of pharmacist Kyle Brocklebank, in the province of Gauteng in the north of the country.

The principle is, as in all pharmacies, to provide the public with the famous herb on presentation of a prescription. Cannabis is a drug, but its therapeutic virtues in the treatment of pain, among others, are now widely recognized, despite the existence of a few dissenting voices.

It was in September 2018 that the Constitutional Court of South Africa decriminalized the use of marijuana for private consumption. This was the culmination of a long and sometimes politically charged battle begun by Myrte Clarke and Julian Stobbs, a couple campaigning for the lifting of the restrictive framework around hemp.

This decision had contributed to stimulate the know-how of the actors of the dagga – name given locally to the cannabis – notably through a fair in Pretoria, a first in Africa.

But despite this enthusiasm, which was reinforced by the liberalization of the cultivation and marketing of the plant for therapeutic purposes, the persistent legislative vacuum left little room for the development of a sector with a potential estimated to be worth more than 6.3 billion dollars in Africa by 2023, according to the organization Prohibition Partners.