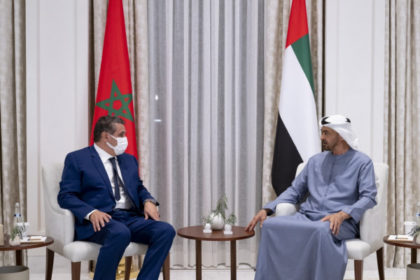 During the meeting, the two sides discussed the prospects of further consolidating the brotherly relations binding the two countries and the various aspects of cooperation, especially in areas of investment and economy, with a view to spurring the development drive in the two countries for the higher good of their peoples, reported the UAE news agency WAM.

They also reviewed the latest developments in the Arab region and exchanged views over a number of regional and international issues of common interest, WAM added.

The discussions touched on the now-running Expo 2020 Dubai and the importance of the Arab countries’ participation in the event, a venue where they could share the latest innovations and solutions with various participating countries in areas of sustainability for the common good of humanity at large and wellbeing of all world peoples.

During the audience, Akhannouch conveyed the Sovereign’s greetings and best wishes for health and happiness to the President of the United Arab Emirates, Sheikh Khalifa Ben Zayed Al Nahyane, and to the Crown Prince of Abu Dhabi, and his wishes for continued progress and prosperity to the UAE and its people.

Sheikh Mohamed conveyed his warmest regards to King Mohammed VI, wishing him continued good health and progress and development for the Kingdom of Morocco and its people under his wise leadership.