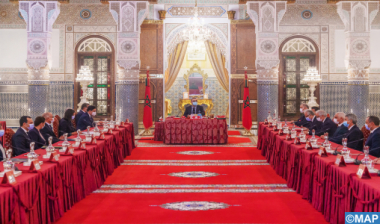 Morocco’s 2022 draft budget plans measures to bolster economic recovery, generalize social safety nets, and promote employment in addition to continuing the overhaul of the health and education sectors, a statement of the Royal Palace said.

The statement was issued after a Council of Ministers, held Sunday under the chairmanship of King Mohammed VI and during which finance minister Nadia Fettah Alaoui gave broadlines of the draft budget that will be submitted to the parliament for approval.

The draft budget was prepared at a context marked by the start of the recovery of the Moroccan economy and the implementation of the new development model.

Priority will be first given to supporting economic rebound by adding new momentum to productive sectors and creating more jobs, the statement cited the finance minister as saying.

Young people will have access to loans as part of Intelaka program which shall be spurred by a new initiative dubbed “Foursa” (opportunity) allowing them access to credit without pre-conditions.

In this respect, the Mohammed VI investment fund will be launched along with an investment charter as well as the tax system reform.

Social protection will be promoted through generalizing health insurance and gradually launching allowances to needy families after the completion of the unified social register.

The education system will be overhauled in order to play its role as a “social ladder”, the minister said, adding that the health sector will also be developed.