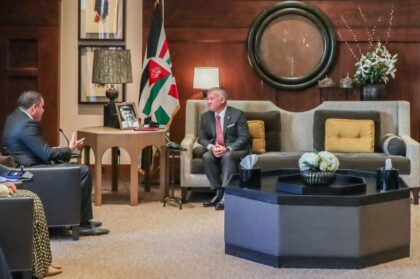 King Abdullah II of Jordan reiterated his country’s support to Libya and to efforts to protect the North African country’s sovereignty and territorial integrity, a statement by the Jordanian Royal Court said.

The monarch, according to the statement, reaffirmed that Jordan stands with Libya and supports political efforts that safeguard its unity, security and stability, and fulfil the aspirations of its people.

The meeting, which was attended by officials from both sides, agreed the Jordanian and Libyan health ministers should sit together to draw plans to rehabilitate and develop Libyan health workers, where Jordan would offer its expertise in that area.

Khasawneh stressed Jordan’s support for the political reconciliation that would uphold security and stability in Libya and help the country fight terrorism.

He underscored Jordan’s keenness to place its expertise and capabilities at the disposal of the Libyan government.

Dbeibeh, who highlighted Jordan’s regional role in finding solutions to many regional and international challenges, lauded the Jordan-Libya “deep and historical” ties, and said that his country is keen to involve Jordan in the efforts to rebuild Libya, according to PETRA.

Dbeibah is leading Libya’s Government of Nation Unity under an agreement between various rival Libyan sides.

Libya is struggling with the influence from several countries that have foreign fighters in the oil-rich country to protect their interests and proxies.