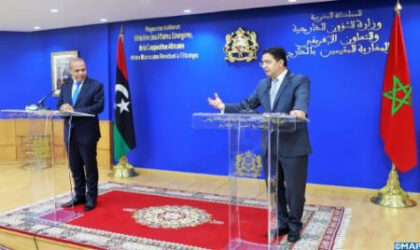 Morocco and Libya will hold in the coming days a joint consular meeting to address the issues of Libyan and Moroccan nationals living in both countries.

The announcement was made by Moroccan Foreign Minister Nasser Bourita during a joint press conference held Wednesday in Rabat with vice-president of the Libyan presidential council Abdallah Al-Lafi.

Talks between the two officials also covered bilateral cooperation prospects in various sectors and the upcoming meeting of the Moroccan-Libyan business forum as well as the ongoing political process in Libya.

In this connection, Bourita said that “Morocco will always stand with Libya, by supporting its efforts and those of the international community, without any interference or agenda except that of the security and stability of this country.”

He also underlined King Mohammed VI’s support for the political process in Libya, the achievements of the Presidential Council and the provisional executive powers, as well as all Libyan efforts to overcome the difficulties and meet the aspirations of the Libyans.

Morocco remains convinced that Libya and the Libyans are capable of overcoming the difficulties of the political process, the preparations of the elections and the respect of the security and military commitments, said Bourita.

The elections are an important step for establishing legitimacy in Libya, underlined Morocco’s top diplomat, stressing the importance of dialogue and negotiations for the resolution of all issues.

Bourita also said that he discussed with the Libyan official the issue of national reconciliation to turn the page of the past and promote cohesion between all components of the Libyan people, affirming that Morocco is ready to share its experience with Libya, citing in this regard the achievements accomplished by the Moroccan Equity and Reconciliation Commission.

For his part, the Libyan official commended the positive and key role played by Morocco for promoting dialogue and consensus between Libyans, citing the UN-brokered Skhirat agreement, the inter-Libyan dialogue meetings held in Bouznika as well as the meetings hosted by Morocco to bridge the gap between President of the Libyan High State Council and Speaker of the Libyan House of Representatives.

After his meeting with Bourita, the Vice-President of the Libyan Presidential Council was also received by Head of Govt. Saad Eddine El Otmani. Talks focused on the strong bilateral ties, the challenges Libya is facing, latest regional & international developments as well as several issues of common interests.