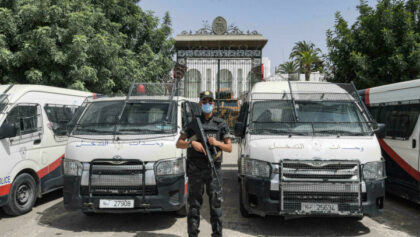 Tunisian President Kais Saied is continuing the purge at top state level he started since he provoked a political crisis late last month when he assumed all executive power.

The latest dismissals, announced on Tuesday, concern the country’s ambassador to Washington Nejmeddine Lakhal, and the Governor of Sfax, a key Tunisian province, Anis Oueslati.

No explanation was given for the new wave of dismissals by President Kais Saied who has been ruling by decree since late July.

A statement from the presidential office said extraordinary and plenipotentiary ambassador Nejmeddine Lakhal has been fired, without further details. Lakhal was appointed to the position on December 23 last year.

The office also said the President relieved of his duties Sfax governor Anis Oueslati who has been in the position since August 2019.

The Tunisian President fired July 25 Prime Minister Hichem Mechichi, seized the executive power and suspended the parliament in addition to revoking the immunity of the lawmakers. The move has been labelled “a coup” by critics but Saied has received the full support of Egypt and Algeria while several countries have been mild in their positions.

Egypt is reportedly secretly advising Saied who made a state visit to Cairo in April and on Tuesday President Kais Saied met, in Carthage, with Egyptian Foreign Minister Sameh Shoukry, who was handed him a message from the Egyptian President.

The President commended Egypt’s solidarity with Tunisia in its fight against the COVID-19, which reflects the shared values of friendship, solidarity and mutual assistance, said a Presidency statement, relayed by TAP.

He reiterated the commitment to bolster the relations of coordination and cooperation between the two countries, highlighting the correlation between their security and stability.

According to the statement, the Egyptian official conveyed President Al-Sisi’s “full support for the historic steps taken by the Tunisian President to fulfill the will of the people, ensure stability in Tunisia and preserve its interests,” expressing confidence in “President Saied’s ability to lead this constitutional process steadily.”