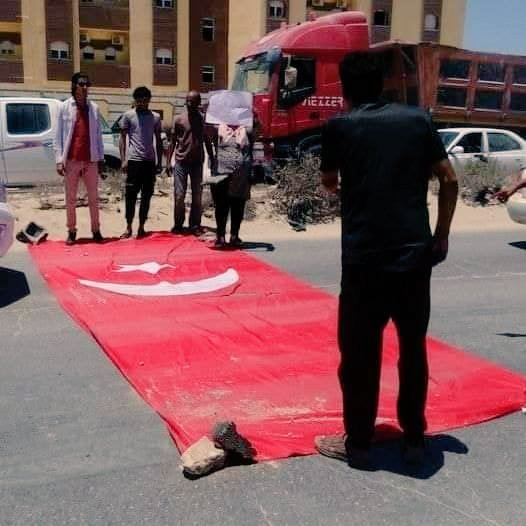 Turkey Tuesday complained to Libyan authorities about the desecration of its flags by followers of Libyan rebel General Khalifa Haftar, in Tobruk, East of the oil-rich African country.
Haftar’s supporters placed a Turkish flag on the street for cars to drive on it en route to the headquarters of the House of Representatives in Tobruk, in a sign of their rejection to Turkey’s support for the Volcano of Rage Operation that repelled Haftar’s offensive on Tripoli between April 2019 and June 2020, Libya Observer reports.
Turkey intervened on the side of the then Government of National Accord (GNA) headquartered in Tripoli to thwart the rebel military commander’s offensive.
Turkish Foreign Ministry spokesperson, Tanju Bilgiç, Libya Observer reports, in a Tuesday statement called the incident a “heinous act.”
“Immediately after learning of the heinous act, our Tripoli Embassy made the necessary written and verbal initiatives before the Libyan Ministry of Foreign Affairs and demanded that necessary measures be taken to prevent such provocations and to prevent similar incidents from recurring.” Bilgiç indicated, noting that the act clearly intended to target the Turkish-Libyan friendship.
Turkey following the intervention has become a major player maker in the African country. Aside from Ankara, other countries including UAE, Qatar, Russia and France are calling the shots in the oil-rich country.