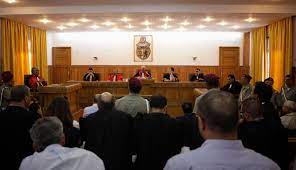 Ennahdha, the largest party in the Tunisian legislature, Tuesday slammed the condemnation of a prominent blogger by a military court following a lawsuit lodged by the office of President Kais Saied for defamation.

Slim Jebali, a famous blogger in Tunisia was hauled Monday into prison after appearing before Kef military court after four lawsuits were lodged against him by the Tunisian presidency over insults to President Saied through Facebook posts.

Jebali, the administrator of “Minister of Blood Pressure and diabetes” page, reportedly posted in February 3 comments considered by the presidency as attacks on the country’s leader.

On Tuesday, Islamist Ennahdha issued a statement condemning the use of military courts to judge civilians and called for the preservation of the freedom of speech enshrined in the Tunisian constitution.

The party also indicated that it is opposed to any action against bloggers and civil society activists adding that their prosecution endangers the freedom of speech in the North African country.

In recent years, Tunisia has witnessed several trials of bloggers accused of insulting the president, most notably the trial of blogger Imad Dhaig on charges of “incitement” against the late President Beji Caid Essebsi, London-based Al Quds notes.

Jebali also made the headlines in 2017 when he was arrested after the lawsuit lodged by the communication advisor of former Prime Minister Mofdi Mseddi for defamation through social media.