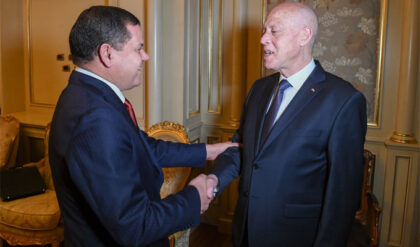 The Tunisian president visited Libya on Wednesday 17 March, the first visit by a head of state to the new leaders of the national unity government.

The menu of the meeting was copious: the fate of the families of jihadists, the position towards Israel and economic cooperation.

During the eight-hour visit, Tunisian President Kais Saied met with Prime Minister Abdel Hamid Dbeibah and then with the President of the Presidential Council, Mohamed el-Menfi.

If the Tunisian head of state was the first official host of the new executive, it is Tunisia that made the first concrete gesture. Tripoli announced the return to Tunisia of a group of women and children of suspected Tunisian jihadists, although their return is debated in Tunisia. Some political parties are demanding that they be stripped of their nationality.

On the economic front, the President of Tunisia has proposed a joint investment plan to facilitate trade and financial transfers. The crisis in Libya has reportedly cost about a quarter of Tunisia’s growth between 2011 and 2015.

Kaïs Saied, who opposed the normalization of relations between Morocco and Israel, called for a revival of the Arab Maghreb Union, the moribund regional grouping created in 1989 by Morocco, Mauritania, Algeria, Tunisia and Libya.