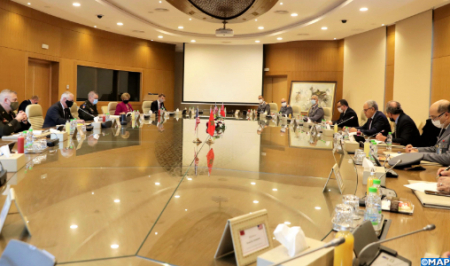 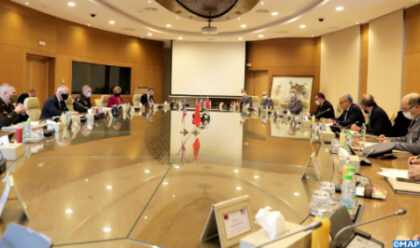 At the high instructions of King Mohammed VI, Supreme Commander and Chief of General Staff of the FAR, the Morocco-US Defense Consultative Committee (DCC) convened its 11th session this Tuesday at the headquarters of the National Defense Administration.

The session was co-chaired by Morocco’s Minister Delegate for National Defense Administration, Abdellatif Loudyi, and US Under-Secretary of Defense in charge of Political Affairs, Anthony Tata.

Anthony Tata is on a three-day working visit to Morocco at the head of a large military delegation.

At the start of the discussions, Loudyi and Tata expressed their satisfaction with the Morocco-US cooperation in the field of defense, and their shared resolve to further develop this strong, excellent and sustainable cooperation, said the General Staff of the Royal Armed Forces (FAR) in a release.

They also highlighted their shared ambition to further develop these long-standing relations in the same spirit of friendship, mutual understanding and shared trust, the release added.

The two officials stressed in this regard the importance of the decision of the US administration to recognize Morocco’s full sovereignty over the entire region of the Moroccan Sahara. This recognition makes the Moroccan autonomy initiative the only realistic, serious and pragmatic solution to the regional conflict over Morocco’s southern provinces.

The two sides also underlined that this historic event will certainly have positive impacts on the geostrategy of the region as well as on peace, stability, security and economic integration in the Maghreb, the Sahel and the Middle East, the release stated.

The Moroccan official highlighted in this vein the unwavering commitment and multidimensional strategy, led by Morocco, under the leadership of King Mohammed VI, in the fight against terrorism, illicit trafficking, and the humanist management of migration crisis.

He also underlined Morocco’s role as an actor in regional stability in the Sahel and the Mediterranean, in particular the efforts made by Morocco in the framework of South-South cooperation, for economic development and capacity building of the military forces of several African countries, in particular through training and the exchange of expertise.

During the talks, Loudyi stressed the importance of consolidating military cooperation with the United States through the promotion of joint investment projects in Morocco in the defense industry sector, in order to boost technology transfer and gradually implement the kingdom’s autonomy strategy in this area.

The two officials expressed their satisfaction with the positive results of bilateral military cooperation. This regular, dense and diversified cooperation covers in particular the fields of management training, the exchange of expertise and the organization of large-scale joint exercises.

Also on Tuesday, and as instructed by King Mohammed VI, Supreme Commander and Chief of General Staff of the FAR, Inspector General of the Royal Armed Forces Abdelfatah Louarak held talks with the US Defense Secretary in the presence of several high-ranking officers from the Moroccan Royal Armed Forces and the Royal Gendarmerie.

The two men took stock of bilateral military cooperation, which includes the organization of combined exercises, the exchange of information visits and the participation in various training courses.

The two sides highlighted their ambition to develop the centuries-old cooperation relations between the two countries’ armies in the same spirit of friendship and shared trust.

They agreed that the deepening of these relations should materialize through the consolidation and diversification of technical cooperation to integrate new components to further develop the interoperability of armies and their capacities to effectively face the threats that may arise.

They also pledged to monitor the work of the Morocco-USA Defense Consultative Committee to strengthen military cooperation between the two countries.

The landmark of this cooperation remains the organization and conduct in Morocco of the combined Moroccan-American exercise “African Lion”, a major exercise, considered among the most important combined exercises in the world.

The meeting of the Morocco-US Defense Consultative Committee, which is held every two years alternately in Rabat and Washington, is part of bilateral military cooperation which mainly focuses on training, military equipment and logistics.

North Africa Post's news desk is composed of journalists and editors, who are constantly working to provide new and accurate stories to NAP readers.
NEWER POSTAutomotive: Yazaki & Sumitomo to invest over $103 Mln in Morocco
OLDER POSTFormer Israeli Ambassador to Egypt to head diplomatic mission in Morocco