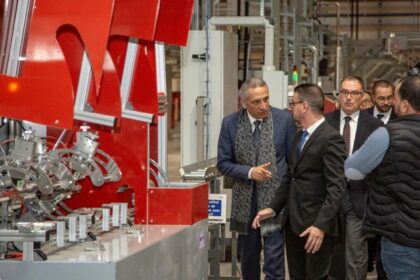 The plant that required a total investment of nearly MAD 240 million aims to meet the growing demand of locally established car manufacturers, including Renault and PSA, which are two major customers of the GMD group.

“This fifth unit confirms the pioneering role of the group as being the first supplier of automotive seals in Morocco to produce EPDM profile extrusion technology,” GMD Group President and CEO Alain Martineau said during the inauguration ceremony.

“With this key investment, Sealynx automotive Morocco is strengthening its leading position in the local market,” he added.

Sealynx automotive Morocco “benefits from the latest technologies developed by the international Sealynx waterproofing division with the expertise of the Tangiers teams,” he told MAP, adding that Morocco has established itself as a “land of development with qualified people ready to work.”

Morocco’s Minister of Trade and Industry Moulay Hafid Elalamy on his part said the plant comes to meet the “strong demand of the Moroccan automotive ecosystem whose performance is well established.”

Elalamy who highlighted the potential of Morocco’s automotive sector said the industry is gaining strength.

“We are aware that car manufacturers need a significant local integration rate,” he said.
With the new plant, Morocco is strengthening its position as an automotive leader.

Beyond production, Sealynx International also aims, starting in 2020, to gradually develop a new product development center for the local market.

Morocco’s proximity to the European market, modern infrastructures, free trade zones, skilled manpower, open economy and stability have all contributed to making Morocco a regional car industry hub attracting investments by automotive giants such as Renault and Peugeot in addition to world class car part manufacturers including from India, Japan, and South Korea.