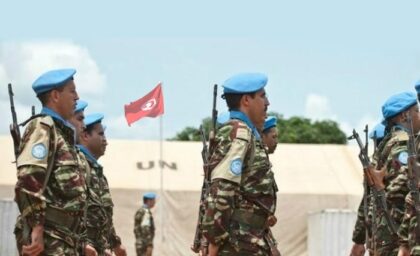 President Kais Saied green-lighted the Tunisian mission made of troops from the military aviation.

The Tunisian troops, to join the UN Peacekeeping Mission in the Central African Republic (known by its French acronym MINUSCA), will take part in air rescue operations, medical evacuation and transportation of personalities, according to a statement aired on the national television.

They will be in the country for one year and could stay for another year, if their mandate is renewed.

CAR has slid into chaos since 2013 due to internal conflicts. The central African country has recently witnessed renewed violence with the birth of a new rebel coalition against incumbent President Faustin-Archange Touadera.

The rebels are opposed to Touadera’s plans to seek another term in office during Dec. 27 presidential and legislative elections.

Russia, a backer of the African leader, has sent additional 300 military instructors to the country to help curb the violence.

North Africa Post's news desk is composed of journalists and editors, who are constantly working to provide new and accurate stories to NAP readers.
NEWER POSTAlgeria, Egypt countries where workers have no rights – International Trade Union Confederation
OLDER POSTMorocco to send pilots to US to receive training on Apache helicopters