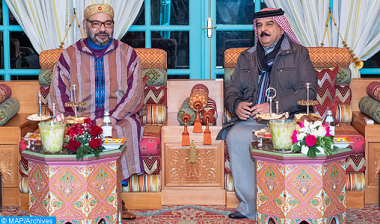 Bahrain has announced the opening of a consulate general in Laayoune, in the Moroccan southern provinces, becoming thus the third Middle Eastern country to make such a decision after the United Arab Emirates and Jordan.

The decision was announced by King of Bahrain Sheikh Hamad Bin Isa Al Khalifa in a phone call he had Thursday with King Mohammed VI, a statement by the Royal Office said.

During the phone call, the Bahraini leader commended King Mohammed VI’s decision to secure the Guerguarat border crossing on November 13, describing the intervention as decisive and effective to preserve peace and stability in this part of Moroccan territory, the statement said.

The non-offensive action to end Polisario’s three-week blockade of the crossing guaranteed the resumption of the normal and secure flow of people and goods between Morocco and Mauritania, Sheikh Hamad Bin Isa Al Khalifa said.

King Mohammed VI expressed his warm thanks to the Bahraini ruler for “this important decision” to open a consulate in Laayoune, saying it reflects the “unwavering solidarity between the two brotherly countries.”

Bahrain will be the third Middle Eastern country to have a diplomatic representation in the region after the UAE, which opened its consulate on November 4, and Jordan, which announced its plans to have a consulate in the Moroccan Sahara last week.

With these new announcements, a total of 19 countries will have diplomatic representations in the southern Moroccan cities of Laayoune and Dakhla.