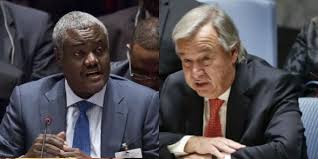 Chairperson of the African Union Commission Moussa Faki Mahamat has reaffirmed the African Union’s full backing to the decision adopted by the African summit of Nouakchott on the Sahara and UN efforts made to reach a mutually acceptable political solution to this regional conflict.

The report submitted by UN Secretary-General Antonio Guterres to the Security Council states that Mr. Moussa Faki has assured the UNSG personal envoy for the Sahara, Horst Köhler of his support for UN efforts to resolve this conflict.

The goal of this mechanism is to provide effective support to the UN-led efforts, which confirms the UN’s exclusivity in dealing with Sahara issue.

In March, the city of Marrakech (Morocco) hosted an African Ministerial Conference to show AU’s support to the UN political process on the Sahara.

The resolution of the Sahara conflict would require “strong political will, not just from the parties and neighboring states, but also from the international community”, the UN chief said in his latest report to the Security Council.

“A solution to the conflict is possible”, he stressed in his report that takes into account the outcome of the two Geneva round-table meetings held on the Sahara with participation of Morocco, Algeria, the Polisario and Mauritania. He conceded, however, that building trust between all sides will take time.

In his report, the UN Chief addressed several issues, including the situation in the Tindouf camps where repeated demonstrations protest against the dire humanitarian condition, the human rights violations and the humanitarian assistance embezzlement.

He also brought up the violations by the Polisario of the demilitarized zone and of the military agreements in force.

The UN Secretary-General on the other hand informed the Security Council members that Morocco continues to invest in the Moroccan Sahara, and that local populations directly benefit from these investments and are consulted for their implementation.

Guterres also highlighted the calm and stability prevailing in the Moroccan Sahara.

Morocco’s huge investments in its southern provinces had impressed the UNSG Personal Envoy Horst Köhler, during his visit in July 2018 to the cities of Laayoune, Dakhla and Smara, as mentioned in the Secretary-General’s previous report in October 2018.

In addition, the Secretary-General refers to the two resolutions of the European Parliament, adopted on January 16 and February 12, by which it approved the extension of the application of the agriculture and fisheries Agreements between Morocco and the European Union to the Moroccan Sahara.

In his report, Antonio Guterres called for extending MINURSO mandate and proposed to increase the annual budget of the mission to $56.4 million, for the period from July 2019 to June 2020. MINURSO currently has 235 members.

This proposal must be validated by the UN General Assembly.

The Security Council members are expected to hold consultations on the Sahara and to renew the mandate of the MINURSO before it expires on 30 April.