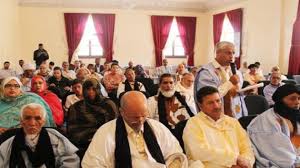 In its resolution N° 2548, which extends the mandate of MINURSO until October 31, 2021, the Security Council “welcomes the measures and initiatives undertaken by Morocco, and the role played by the Commissions of the National Human Rights Council in Laayoune and Dakhla, as well as Morocco’s interaction with the mechanisms of the United Nations Human Rights Council”.

The Security Council also expresses its “deep concern at the persistent suffering” endured by the populations in the Tindouf camps in Algeria.

The UN Secretary General, in his last report to the Security Council on the Moroccan Sahara issue, once again underlined the role of the leaders of the “polisario” in the serious and systematic violations of human rights in the Tindouf camps.

The Secretary General has thus enumerated the numerous reports received by the Office of the High Commissioner for Human Rights (OHCHR), regarding the massive and large-scale recourse, by the Polisario, to “harassment, arrests and ill-treatment of bloggers, doctors and nurses” in the Tindouf camps.

The report stresses that these serious violations have multiplied over the past few months against all those “engaged in the documentation of COVID-19 cases in the Tindouf camps”. This new wave of repression by the Polisario is just a recent example of the massive and continuous violations by this separatist armed group, to silence the voices of dissidents, bloggers, journalists, activists and anyone who is against the despotism of its leaders.

The Security Council’s resolution reiterated the UN executive body’s request for the registration and census of the populations of the Tindouf camps, stressing “that efforts should be made to this end”.

Registration is, in fact, a humanitarian and statutory requirement and a contractual responsibility of the host country, Algeria, which has refused registration for more than four decades.

This registration is also a sine qua non condition for protecting the rights of the populations held against their will in the Tindouf camps and putting an end to the systematic and large-scale diversion of humanitarian aid by the Polisario leaders and local officials.

Resolution N° 2548 once again confirmed Algeria as a main party to the process aimed at achieving “a political, realistic, pragmatic and lasting solution” to the Sahara issue, “which is based on compromise.”

The Security Council resolution mentions Algeria five times, as many times as Morocco.

The resolution thus expresses the “full support” of the Security Council for the efforts of the UN Secretary General and his next Personal Envoy to maintain the new momentum of the political process aimed at achieving a solution to the Sahara issue.

In this regard, the UN executive body recalls that the former Personal Envoy, Horst Köhler, had agreed with Morocco, Algeria, Mauritania and the Polisario to hold a new meeting “in the same format” as that of the previous round tables held in Geneva in December 2018 and March 2019.

North Africa Post's news desk is composed of journalists and editors, who are constantly working to provide new and accurate stories to NAP readers.
NEWER POSTUAE to open its Consulate General in Laayoune Next Wednesday
OLDER POSTUS Reaffirms Moroccan Autonomy Initiative in the Sahara is ‘Serious, Credible and Realistic’