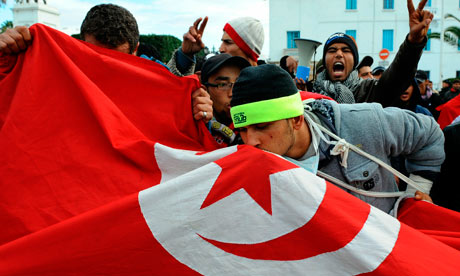 Tunisian political parties have been unable to choose a new Prime Minister during their week long negotiations. Monday has been fixed as the new deadline for them. Some members of the opposition are accusing Ennahda of delaying the process in order to stay longer in power.
Several names have been considered as potential candidates in the negotiations which started on October 25th. Defense Minister Abdelkarim Zbidi, former chairman of the Tunisian League for Human Rights MokhtarTrifi, former central bank governor Mostafa Kamall Nabli and Ahmed Mestiri, founder of the Movement of Socialist Democrats were all considered to stand a chance.
There are reports that the race for the interim prime minister has been reduced to two; Mohamed Ennaceur, 79, supported by the opposition, and Ahmed Mestiri, 88, backed by Ennahda and its allies.
The powerful UGTT trade union has announced that the new deadline for political parties to agree on naming the head of a government is “Monday noon.” The first deadline was on last Saturday.
“We did not come to a consensus on the name of the prime minister … we will continue the talks for a day or two to reach an agreement,” Amr al-Irid, the political chief clerk of Tunisia’s Ennahda party, told Al Arabiya.
Ennaceur and Mestri are highly respected personalities in Tunisia and they have both served under the late HabibBourguiba, who led the fight for Tunisia’s independence from its French colonial masters and served as its first president for three decades from 1957.
The naming of an interim prime minister is a key point in ending the Tunisian crisis. He will be responsible in forming a government of independents within a fortnight to prepare the country for elections.