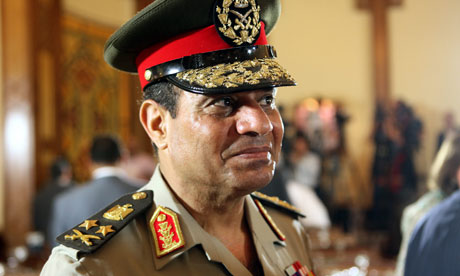 Priorities Anyone? – Obama’s Egypt Problem Isn’t Going To Go Away

It was an excruciating experience for observers and journalists alike. Following the coup of 3 July 2013 and the quiet consolidation of power by army chief al-Sissi, the United States had to weigh its future policy vis-à-vis Egypt carefully.

But nobody quite expected the diplomatic tussle that followed – an administration unwilling to recognise a coup right in front of its eyes and a Secretary of State using Islamabad as the stage of choice to welcome Egypt’s military as the safeguard for democracy. At the same time, journalists were leaving the press room of the State Department in disbelief: the administration simply did not qualify the events in Egypt in any meaningful way. That is as long as you do not consider a feeling of general encouragement by the developments in Egypt meaningful.

Now, some three months after the army removed the first democratically elected president from office, the Obama-administration has finally decided on a course of action. While military assistance is being continued, big ticket items will no longer be delivered to Egypt. No more Abrams tanks and no new fighter jets and attack helicopters will be shipped to Cairo. Assistance will focus on maintenance of weapons systems already in service, counterterrorism operations and capabilities and border security. In the meantime, the post of U.S. ambassador to Egypt remains vacant, though the State Department has yet to explain why the post is still lacking a nominee, while the relationship is still considered to be important and the timing, as Foggy Bottom readily admits, critical. But what emerges from all this is a clear picture: Egypt is no longer a stalwart ally of the United States in the Middle East. Instead, the United States is drastically shifting its regional priorities. Arab-Israeli peace talks offer a glimmer of hope for the moment, and talks with Iran are being enthusiastically embraced, while the deal on Syria’s chemical weapons has shown that Washington is willing to surrender its strategic objectives, if it is only allowed to further disengage from the region.

All this is the result of an administration lacking a coherent policy when it comes to the Middle East. Ambitious rhetoric – think of Obama’s hailed Cairo speech – is often being met with ambiguous policy at best. President Obama’s widely discussed ‘Pivot to Asia’ strategy often feels like a fig leaf, providing legitimacy to a policy that leaves the Middle East and Northern Africa unattended, no matter its long-term implications. The new policy on Egypt reflects the administration’s narrowing objectives. It is not that delivering tanks and attack helicopters were symbols of a broader agenda focused on the political transformation towards democracy. It is that, in contrast to the Bush administration, Obama is dead set to narrow the political objectives to counterterrorism alone and no thought is given to the Middle East we want to see emerge from the Arab Spring. These priorities are often welcomed as more realistic in nature, even though only a political transformation of the Middle East could remove the roots of Islamic fundamentalism. The bottom line is that this policy might force the 45th president of the United States to ‘pivot back’ to the Middle East. After all, what the decades in the run-up to the 9/11 attacks have shown clearly is that a policy focused on stability in the region alone is utterly insufficient, if not outright self-defeating.