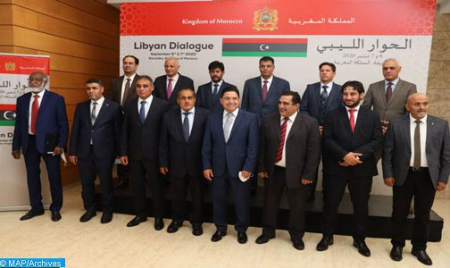 The Moroccan government has welcomed the cease-fire agreement signed lately by the Libyan warring factions in Geneva under the United Nations auspices.
This is a “very positive development” and “very good news”, said Moroccan foreign minister Nasser Bourita at a joint press briefing held on Saturday in Rabat with Speaker of the Libyan House of Representatives, Aguila Saleh.
Morocco congratulates the Libyan parties and the United Nations for this “new achievement”, said Mr. Bourita, calling on all Libyan parties to respect the cease-fire accord which will help create favorable conditions for advancing on the path of a political solution.
He highlighted the positive input of the inter-Libyan Dialogue held in Bouznika, saying that King Mohammed VI is convinced that Libyans are able to solve their problems by themselves with a sense of patriotism and responsibility which can help them overcome all obstacles and achieve a solution.
For his part, Mr. Saleh Aguila praised Morocco’s support of a political solution to the Libyan crisis and commended the efforts made by Kingdom within the framework of the inter-Libyan Dialogue which contributed to the conclusion of the ceasefire agreement sealed in Geneva.
Chief of the UN Support Mission in Libya & acting UN Special Representative Stephanie Williams also hailed the cease-fire agreement as “a courageous act that can help secure a better, safer, and more peaceful future for all the Libyan people”.
She also described the accord as “a fundamental step toward peace and stability”.