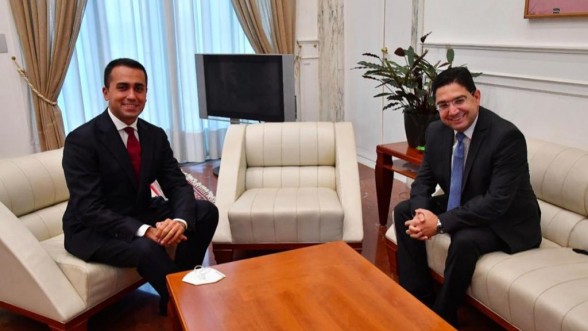 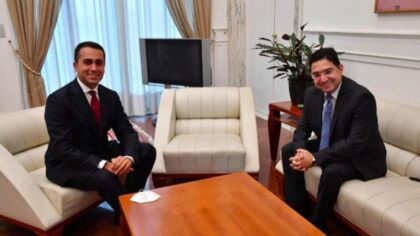 The Moroccan Minister of Foreign Affairs who paid a short working visit to Italy Wednesday held talks with his Italian counterpart Luigi Di Maio, and the Speaker of the Chamber of Deputies, Roberto Fico.

Bilateral cooperation on issues of common interest such as migration, the stabilization process in Libya and the fight against terrorism were at the centre of discussions, reports the Italian news agency “Agenzia Nova”.

Nasser Bourita’s trip to Italy falls in the frame of the strategic dialogue signed in November 2019, in Rabat, between the two countries.

The visit is also part of the high-level political consultations between Morocco and Italy.

Nasser Bourita’s talks with his Italian counterpart surveyed regional and international issues of common interest, with focus on the Libyan crisis and the Sahel region.

Actually, Bourita’s trip took place a day after the second round of inter-Libyan dialogue that was held in Bouznika this October 2 – 6.

The Italian government is closely following Morocco’s facilitation of the inter-Libyan dialogue, Di Maio said, highlighting Italy’s appreciation of the Kingdom’s commitment to facilitating the dialogue.

The two sides also discussed the issue of illegal immigration and convened on the paramount importance to pool efforts to deal with the phenomenon.

Talks on the other hand covered economic cooperation, Italy viewing Morocco as a regional hub and a key player in economic issues of interest to the Mediterranean region and the African continent.

At a joint news conference following the talks, Di Maio said Italy considers Morocco to be a central partner not only on the political level, but also on the economic and cultural levels, adding that the meeting with his Moroccan peer was the occasion for a useful and in-depth exchange of views.

The visit of the Moroccan top diplomat to Italy comes one year after the visit of his Italian counterpart in Morocco.

During this visit in November 2019, the two parties signed a joint declaration, establishing a multidimensional strategic partnership between Rome and Rabat.

Morocco is indeed a strategic country for Italy, because of its economic growth and the many opportunities for Italian companies in terms of investment.

Currently, there are about 250 Italian companies in Morocco.

Over the period January-August 2019, Italy ranked fifth among Morocco’s trading partners, being the fifth supplier (5.3% share) and the fifth customer (4.2% share).

In the first eight months of 2019, exports remained virtually unchanged compared to the same period in 2018, with a value of more than 1.4 billion euros.

Among Italian imports from Morocco, motor vehicles clearly dominate (34.2% of imports), followed by processed and preserved fishery products (20.9%), parts and accessories for motor vehicles and their engines (14.5%) and clothing (8.2%).