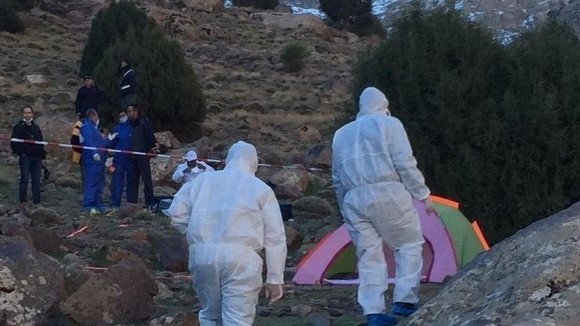 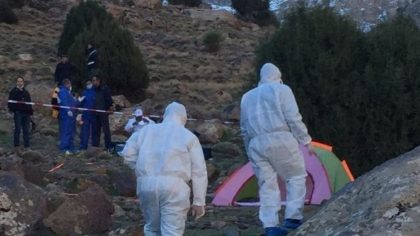 The remains of the two Scandinavian backpackers who were killed near Imlil, in the Atlas Mountains, were repatriated, Friday, to Copenhagen, Denmark’s capital.

Several local online media reported that the bodies of the two hikers who were found dead near their tent on Monday, were flown to Denmark Friday.

The Norwegian embassy in Rabat confirmed to one of these media, yabiladi.com, that the «bodies of Danish student Louisa Jespersen and her Norwegian friend Maren Ueland were repatriated, Friday, on the same plane which is heading to Copenhagen».

Louisa Vesterager Jespersen, a 24-year-old Danish student, and her Norwegian friend, Maren Ueland, 28 were found dead inside their tent near Imlil by French mountaineers on Monday Dec.17.

Moroccan authorities have managed to arrest the four suspects who had pledged allegiance to ISIS one week before the killings.

He said he was “dismayed, disgusted and deeply distressed” by the “brutal” murder of Louisa Vesterager Jespersen and her Norwegian friend, Maren Ueland, confirming that a terrorist investigation has been opened.

The Danish intelligence service said in a statement Thursday “this is a case of an unusually bestial killing of two totally innocent young women.” Evidence suggests “the killings may be related to the terrorist organization Islamic State,” he intelligence service added.

Norwegian Prime Minister Erna Solberg said other leads are being followed as investigators seek a motive for the murders.

The first suspect arrested in Marrakesh on Tuesday was a member of an unidentified militant group, according to the Moroccan bureau for judicial investigations (BCIJ), which arrested later three more suspects, directly linked to the crime, while they were trying to flee Marrakesh by bus.

The BCIJ also announced it arrested, Thursday and Friday, nine other individuals, in five Moroccan cities. All are suspected of links with the four suspects in the savage killing of the two Scandinavian tourists.

The nine new suspects were arrested in the cities of Marrakech, Essaouira, Sidi Bennour, Tangier and Chtouka Ait Baha, said the BCIJ in a statement.

The various searches conducted by the BCIJ during these arrests led to the seizure of several electronic devices, a shotgun, several knives and suspicious products, which can be used in the manufacture of explosives.

The Washington Post, in a story on the two Scandinavians’ murder, said “such killings are exceedingly rare in Morocco, a hugely popular tourist destination.”

“The last high-profile terrorist attack there was in 2011, when a bombing at a restaurant in Marrakesh killed 17 people,” the US wide-circulation paper recalled.

Morocco has “taken a number of steps over the last few years to improve security, dismantle terrorist cells and undermine the ability of violent groups to recruit and operate in Morocco,” the daily quoted Haim Malka, a senior fellow at the Center for Strategic and International Studies focused on North Africa, as saying.

Malka said, Morocco is “working more broadly to try to undermine the appeal of violent extremism.” He said he doesn’t see the murders as part of a larger wave of potential terrorist attacks in the country.

“I see it as an isolated incident, a target of opportunity,” Malka said. “And the fact that these guys were caught already so quickly . . . doesn’t point to a high level of sophistication.”

Meanwhile, Moroccans from all walks of life continue to vent their anger and frustration and to denounce the awful acts while presenting their condolences to the families of the two victims on social media.
A viral message was posted by thousands of Moroccans, followed by a «sorry» and «rest in peace» hashtags. A similar message was massively shared by Moroccan internet users on Twitter, denouncing the «barbaric and horrible» acts.

In addition to the messages shared online, sit-ins were held in front of the Danish and Norwegian embassies in Rabat Thursday and friday.

The Moroccan Lawyers Club on its part announced they are organizing a sit-in in rabat on Saturday to express support to the victims’ families and pay tribute to them.

On Thursday, the Moroccan cabinet and the Parliament had also vehemently condemned the assassination of the two Scandinavian tourists.