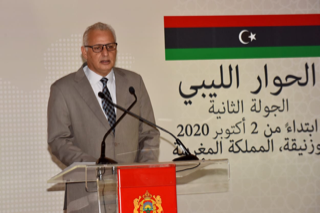 Participants at the high-level ministerial conference on Libya, co-organized on Monday by the United Nations, welcomed the holding of the inter-Libyan dialogue in Bouznika, whose second round continues in the presence of delegations from the Libyan High Council of State and the House of Representatives.

The participants in the virtual high-level meeting “welcomed the international initiatives carried out within the framework of the United Nations process, including meetings in Montreux (Switzerland), Bouznika (Morocco) and Cairo (Egypt),” reads the conclusions of this meeting published by its co-chairs, the UN Chief and the Foreign Minister of Germany.

They stressed “the need for regional and international stakeholders to work together to help the Libyans achieve a lasting political solution”. In this regard, they welcomed the continued efforts of regional organizations to contribute to ongoing peace efforts in Libya.

Speaking at the opening of the conference, UN Secretary General Antonio Guterres said he is encouraged by the latest developments that have marked the crisis in Libya, including the lull in fighting and the inter-Libyan dialogue in Bouznika.

“Delegations from the Libyan High Council of State and the House of Representatives met in Bouznika, Morocco, to discuss the criteria for the selection of sovereign posts,” Guterres said.

The High-level meeting brought together several UN member states as well as international and regional organizations, including the European Union, the Arab League, and the African Union.

North Africa Post's news desk is composed of journalists and editors, who are constantly working to provide new and accurate stories to NAP readers.
NEWER POSTBouznika inter-Libyan dialogue, a ‘real opportunity’ to put an end to a long conflict – UN Envoy
OLDER POSTSignals for a new dawn in Algeria fading away , New York Times